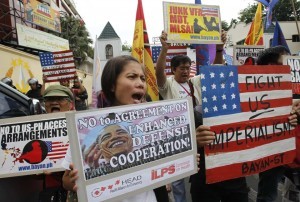 Protesters shout anti-U.S. slogans during a protest rally at the gates of Camp Aguinaldo, the Armed Forces of the Philippines (AFP) headquarters, where the opening ceremony of the Balikatan 2014 U.S-Philippine military joint exercise is being held in Quezon city, metro Manila May 5, 2014. According to an AFP news release, around 3,000 Filipino soldiers and 2,500 U.S. soldiers will participate in the Philippines-U.S. Balikatan 2014 military exercises which will focus on maritime security and humanitarian assistance and disaster response. (MNS photo)

“[Aquino] once again pass[ed] the blame to others the dismal failure of his administration to effectively respond to the perennial power woes of the people in Mindanao,” Bayan Muna Rep. Carlos Zarate said in a statement Monday.

Zarate said the Electric Power Industry Reform Act (EPIRA) of 2001 is the real culprit behind the hours-long rotational brownouts being experienced by residents in Mindanao.

“He got the power crisis upside down,” Zarate said of Aquino. “His prescriptions of mere changes in the EPIRA to supposedly facilitate more competition and increase the number of generating plants are all cosmetic.”

Aquino criticized power cooperatives in Mindanao last week for allegedly failing to address the power shortage there, saying they only decided to invest in generators this year despite being advised as early as 2013 to purchase them in preparation for a possible tightening of power supply.

But Zarate said contrary to Aquino’s statement, the power crisis in the region has been “induced” by the privatization of major government power assets under the EPIRA, which was passed more than a decade ago to bring power rates down by promoting competition in the energy sector.

In addition to this, the government also sold the 96-MW capacity Mt. Apo Geothermal Plant to the Lopez-controlled Energy Development Corp.

Zarate said the privatization “effectively made Mindanaoans virtual hostages of the power cartel.”

“The situation is only made worse by the President’s indifferent declaration two years ago, [when he offered] Mindanaoans with only two options: pay even more higher [for] electricity or suffer more rotating brownouts,” he added.

The legislator warned that the government might use the worsening power situation in Mindanao to justify the privatization of its remaining major power asset, the Agus-Pulangi Hydropower Plant Complex (APHC), which has an effective capacity of 700 MW.

“Instead of prioritizing the development of renewable energy, this situation will also be used to justify the entry of more dirty energy sources like coal-fired power plants, which ironically are also heavily water-dependent technology,” he said.

The lawmaker urged Congress to act now to scrap the law and craft an alternative measure that will lower electricity prices for all consumers.

“It is high time now to put an end to this failed experiment and we return the power sector, this very basic public service, back to the effective control of the state,” Zarate said.  (MNS)

Princess Punzalan fulfilled as a nurse in US