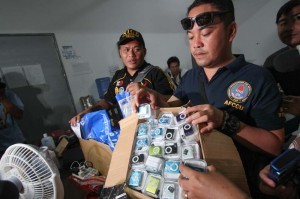 MANILA (Mabuhay) – A lawmaker has proposed amending the Tariff and Customs Code of the Philippines to define any form of smuggling involving goods with an aggregate value of P1 million as an act of economic sabotage.

House Bill 5179, filed by Nueva Ecija Rep. Estrellita Suansing, seeks to amend Presidential Decree No. 1464 in an effort to deter smugglers by imposing steep fines on them.

The measure defines economic sabotage as “any and all activities that undermines, weakens or renders into disrepute the economic system or viability of the country or tends to bring about such effects… which involves goods and/or articles with the aggregate value of P1 million…”

The bill, now pending before the House Ways and Means committee chaired by Marikina City Rep. Romero Quimbo, also seeks to amend Section 3601 of PD 1464 pertaining to unlawful importation, and Section 3602, pertaining to various fraudulent practices against customs revenue, so that any violation of these provisions will be constituted as economic sabotage.

Under the proposal, violators who engage in activities that sabotage the economy will be penalized with a fine equal to twice the fair market value of the articles involved, or a fine equal to the aggregate amount of the taxes, duties and other charges avoided. They also face a minimum jail time of eight years and one day up to life imprisonment, and the confiscation of the articles involved.

If the violator is a juridical entity, the penalty of imprisonment shall be imposed on the president and the officers responsible for the smuggling. In addition, the business permits and licenses of the business entity shall be revoked or canceled.

Suansing said stiffer penalties should be imposed on smugglers, considering the detrimental effect of smuggling on the economy. She noted the government has been losing revenues for years due to smuggling.

The lawmaker cited a report by Global Financial Integrity (GFI) which pointed out that the Philippine government lost at least $19.3 billion in tax revenues since 1990 due to Customs duties evasion through import under-invoicing alone.

Combined with an additional $3.7 billion in revenue losses through export under-invoicing, the government lost at least $23 billion due to trade misinvoicing since 1990, the report said.

“Aside from the revenue losses, smuggling constantly poses as a hindrance to the growth of domestic industries. It fosters unfair competition with the local producers and manufacturers, including licensed distributors, wholesalers and retailers,” she said in the bill’s explanatory note.

The GFI report noted the country lost to smuggling an estimated $3.85 billion in tax revenues in 2011. The lost income, it said, was more than double the size of the fiscal deficit and constituted 95 percent of the total government expenditures on social benefits during the same year.

In the 52-year period covered by the study, the Philippines lost $177 billion through capital flight, the report said.

A separate media report quoting the Federation of Philippine Industries said that from 2002 to 2011, the government lost more than P1.33 trillion in revenues due to smuggling. (MNS)