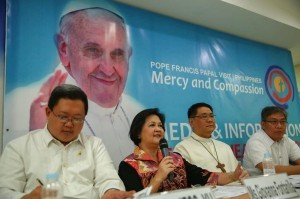 MANILA (Mabuhay) – A lawmaker has asked Pope Francis to express support for agrarian reform during the papal visit to the Philippines so that a bill extending its implementation will gain traction in the House of Representatives.

Ifugao Rep. Teddy Baguilat, chairman of the House committee on agrarian reform, sent a letter to Pope Francis last week asking the pontiff to back calls for the completion of the agrarian reform program in the Philippines.

“I write to you partly with a sense of despair as I seek your prayers for the poor and landless farmers and indigenous peoples in the Philippines. More specifically, I beseech your support for the continuation and completion of agrarian reform in our country,” Baguilat wrote.

Poor farmers and indigenous peoples comprise 40 percent of the Philippine population, the lawmaker noted, telling the pope that they remain among the poorest sectors and stand to benefit if His Holiness openly expresses support for agrarian reform during his visit.

“I am aware that you have many concerns in leading the Catholic faithful across the world, but the dire situation of the Filipino poor, especially the farmers and indigenous peoples, calls for your kind intercession. I therefore hope that you will pray for the triumph of justice in the Philippines through the successful completion of our agrarian reform program,” he said.

Farmers earn an average of P250 or $5.50 per day during the cropping cycle, usually for rice.  This is half of the Philippine minimum wage of P466 or $10 per day and below the average cost of living pegged at around P1,000 or $23.

Baguilat’s letter was supported by farmers groups, employees of the Department of Agrarian Reform and church leaders including bishops of the Catholic Bishops Conference of the Philippines.

House Bill 4296, which aims to extend the land acquisition and distribution component of the Comprehensive Agrarian Reform Program (CARP) until 2016, has been pending at the committee level since last year. The measure was returned to the panel even after it released a committee report in early 2014 due to the contentious provisions which were supposedly opposed by several sectors.

Baguilat had earlier appealed to House leaders to tackle the measure at the plenary before Congress adjourned for the Christmas break but this was thumbed down by House Majority Leader Neptali Gonzales II.

According to the House committee on agrarian reform, some 730 million hectares of land, most of which are owned and controlled by rich families, have yet to be distributed under CARP. The notice of coverage (NOC) to unacquired lands was discontinued starting July 1, 2014.

CARP, enacted in 1988, was tagged as the “centerpiece program” of President Benigno Aquino III’s mother, the late President Corazon Aquino. Under Republic Act No. 9700 or CARP extension with reforms (CARPER), its implementation was extended for another five years in 2009.

Since 1988, around 4 million hectares have been distribute to more than 2 million farmers and their families under the program. (MNS)