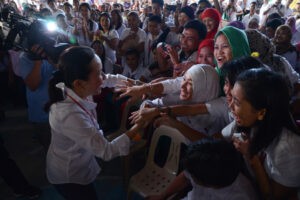 Sotto said the SET will meet on December 3 to decide on a motion for reconsideration filed by presidential hopeful, Rizalito David, on the tribunal’s decision junking his disqualification case against Poe.

Sotto was among the five member-senators of the SET who dismissed David’s case seeking to unseat Poe from the Senate for allegedly not being a natural-born Filipino.

The four others who voted against the case were Senators Loren Legarda; Cynthia Villar; Pia Cayetano; and Bam Aquino, a member of the Liberal Party endorsing the presidential bid of former Secretary Mar Roxas.

Asked if he thinks the SET would still reverse its decision, Sotto said, “I doubt it.”

Villar also expressed doubts earlier that the tribunal would still change its decision.

“Ay hindi (No),” Villar said when asked in an interview last week if she thinks the SET would still reverse its decision against the case.

“I think ang more na tatanungin natin would be after us, ‘yung motion for reconsideration sa SET, kung ‘yun din ang decision, then he goes to the SC, doon ang fight,” she said.

(I think what we should ask would be that after us, the decision of the SET on the motion for reconsideration would be the same, then he goes to the SC, that’s where the fight is.) (MNS)

EU funding in PH up to 325 million euros