(Relaxnews) – The Southeast Asian region’s spending on video games is to double within the next three years, according to research firm Niko Partners, up from an $833 estimate made at the beginning of 2011. 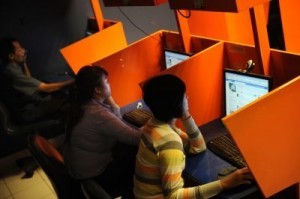 Indonesian Internet users log on at an Internet shop in Jakarta. Facebook games are among the most popular (though not necessarily lucrative) games in Indonesia. Â©AFP PHOTO / ROMEO GACAD

(though not necessarily lucrative) in Indonesia, while the residents of Thailand generate the most revenue per player.

Niko considers Vietnam to be the biggest source of revenue, despite having the most restrictive regulatory policies.

Typically, online games such asÂ Warcraft III modification Defense of the Ancients and recent variant League of Legends are prolific in the region, while western publisher Activision Blizzard has imported World of Warcraft to China.

“MapleStory is simple, colorful, cute and easy to get your hands on. A significant number of players stay with it well into their adult years,” said Robert Chen, founder of MMO Culture, speaking to Relaxnews. “Dragon Nest is its major threat, appealing to players who feel they have grown out of MapleStory.

“Overall, the Southeast Asia market does look good for now. Localized online gaming companies are constantly pushing out new titles and expanding their outreach,” he concludes, noting that League of Legends and Firefall, whose developers are headquartered in the USA, both receive significant support from Chinese corporate backers.

Daniel on Heart: I knew we’d never get back together

Billy Crawford prays Coleen is the one