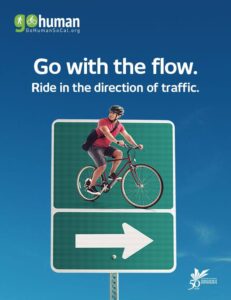 Southern California Association of Governments reminds people to share the road for safety, be aware and choose alternate forms of commuting with a new campaign. (Photo courtesy of gohumansocal.org)

LOS ANGELES, CA – The Southern California Association of Governments (SCAG) today announced the launch of Go Human, a community outreach and advertising campaign with the goals of reducing traffic collisions in Southern California and encouraging people to walk and bike more. Appearing on freeway billboards, buses and bus shelters, the Go Human campaign is a collaboration between SCAG and the health departments and transportation commissions from six counties in the region – Imperial, Los Angeles, Orange, Riverside, San Bernardino and Ventura.

“Increased safety is a value that guides our commitment to improving mobility in the 21st century,” said Los Angeles Mayor Eric Garcetti. “Go Human is an exciting, unprecedented effort, with the participation of many cities and counties, to deliver an important message about our vision to keep people safe – no matter how they choose to get around.”

California has the nation’s highest number of fatalities involving people walking and bicycling, and traffic collisions are one of the top causes of injury and death in the Southern California region. Go Human raises public awareness of the rules of the road through English and Spanish advertising on radio, billboards, buses, bus stops and social media. Go Human utilizes a series of ads where figures in everyday road signs are replaced with images of real people walking and bicycling. By conveying that these aren’t just signs, Go Human reminds us that our actions and decisions, when driving, walking and bicycling, impact real people.

The Go Human campaign comes at a time when the nature of streets and types of travel on them is changing dramatically. Bicycling across Southern California increased 70 percent between 2007 and 2012, and in places like Santa Monica, where growing demand has been matched with investment in bike facilities, bicycling has increased more than 300 percent. Investment in walking and bicycling infrastructure is anticipated to grow with more than half a billion dollars being invested across the region by 2020.

“Three years ago our region adopted a transportation plan that doubled investment in active transportation, and our cities and counties are making good on that commitment,” said Hasan Ikhrata, SCAG’s Executive Director. “Not only do we have cities like Los Angeles launching its Vision Zero initiative and new mobility element, but there are dozens more. Go Human provides the education, awareness and encouragement to accompany the changes that we are all starting to see in our communities and on our streets.”

More than half of the 191 cities in the Southern California region have been pursuing funding opportunities to create safer and more attractive streets for walking and biking. The growing emphasis on active transportation is driven in part by local leaders’ interest in improving public health. The region’s population suffers from high chronic disease rates related to physical inactivity such as obesity and hypertension. Many doctors and public health experts, including the Surgeon General of the United States, are encouraging people to walk more.

“Sedentary lifestyles have had a profound impact on health and have contributed to the rising rates of obesity, diabetes, and hypertension in our communities today, leading to premature death and the loss of many years of life. Engaging in regular physical activity such as walking or bicycling helps maintain a healthy body weight, provides major protective effects against obesity and chronic disease, and improves mental health and quality of life,” said Dr. Jeffrey Gunzenhauser, MD, MPH, Interim Health Officer for Los Angeles County. “Go Human not only reminds us to look out for one another on the road, but also encourages us to unplug, walk a little bit more and bike a little bit more in our local communities. This will benefit our health and the local economy, too.”

By encouraging Southern California residents to walk and bike more, SCAG’s Go Human Campaign plays a key role in this transformation. As cities around the world have shown, walking and bicycling are an efficient means to move people and connect commuters to public transit. In the SCAG region, approximately 38 percent of all trips are less than three miles, a distance that can easily be covered walking or bicycling. Go Human encourages residents to consider walking or bicycling for these short trips.

The Go Human campaign is funded by a $2.3 million grant from the 2014 California Active Transportation Program. In addition to the advertising campaign, Go Humanwill roll-out a series of events in partnership with local communities across the region beginning in May 2016. These events will include open street gatherings and demonstration projects designed to allow residents to temporarily envision and experience roadways that are designed for people and not just cars. These events will also create opportunities for residents to provide input and improve the quality of life in their neighborhoods.

All marketing materials for Go Human are available for co-branding by local cities, agencies and organizations interested in participating. Please visit www.GoHumanSoCal.org for more information and to request materials. Follow us on Twitter and Facebook.

Teachers: Most valued, but underpaid