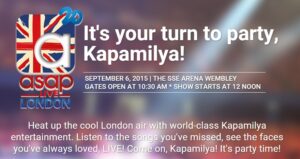 This was the enthusiastic statement of ABS-CBN Managing Director of Europe, Middle East and Africa (EMEA) Kai V. Rodriguez when she shared the big news that major stars from the United Kingdom will not only appear, but will actually perform at the giant “ASAP 20 Live in  London” set for September 6, Sunday, at The SSE Arena Wembley.

“You’d think that celebrating the 20th anniversary of the Philippines’ longest-running, top-rating live musical variety show at a venue as historic as The SSE Arena Wembley with scores of the biggest Filipino stars is already as grand as it could get. But the participation of some of the biggest international acts in this event raised the exitement and expectations even multiple notches higher.  ABS-CBN and TFC’s collaboration with these respected performers in UK underscores the world-class nature of ‘ASAP 20 Live in London’.  This is a Filipino-driven entertainment showcase of the highest level.  Filipinos in Europe and all over the world can truly be proud of this milestone,” explains Rodriguez.

Spandau Ballet has sold 25 million records worldwide with 23 hit singles in the three decades they’ve performed together.  Members Tony Hadley, John Keeble, Gary Kemp, Martin Kemp and Steve Norman are also set to thrill their countless fans in the Philippines this year via their September 21 show at the Mall of Asia Arena, Manila.
Blake – composed of Ollie Baines, Stephen Bowman and Humphrey Berney, three friends who recorded their first album in 2007, just six months after they reunited on Facebook – had performed already in Manila and even released their Filipino album back in 2013 with Original Pilipino Music (OPM) hits like “Don’t Know What To Say (Don’t Know What To Do)”, “Say That You Love Me”, “You Are My Song” (featuring Rachelle Ann Go) and Tagalog songs, “Sa Isip Ko”, “Kailangan Kita” (feat. Joanna Ampil) and Hotdog’s “Manila”.

The current West End production of Miss Saigon, which swept the board at the 2015 Whatsonstage Awards, winning nine – the most ever won by a single show in the history of the awards, including Best West End Show and Best Revival of a Musical – is also bringing nine of its cast members to “ASAP 20 Live in London”.  These are Tanya Manalang (alternate Kim), Christian Ray Marbella (ensemble/alternate Engineer), Natalie Chua, Maria Graciano, Ela Lisondra, Ariel Reonal, Michael Macalintal, Romeo Salazar and Katherine Picar.

‘FIRST YAYA’ STARS SANYA LOPEZ, GABBY CONCEPCION REVEAL QUALITIES THEY LIKE ABOUT EACH OTHER

Rooney Mara vs. Noomi Rapace: Who Will Be the Grittier ‘Girl With the Dragon Tattoo?’