PARIS, November 24, 2010 (AFP) – Scientists unveiled on Wednesday a gossamer, ghostly creature discovered in the deepest reaches of the ocean between Indonesia and the Philippines.

The squidworm, up to 9.4 centimeters (3.7 inches) in length, is far more elegant than its name would suggest. 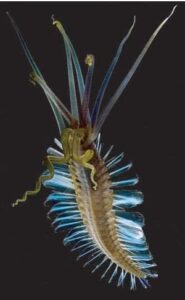 Ten tentacles as long or longer than its body stick out of its head, along with six pairs of curved nuchal organs that allow the squidworm to taste and smell underwater.

Using a remotely-operated submersible, a trio of marine biologists led by Karen Osborn of the Scripps Institution of Oceanography in California found the previously unknown animals in the Celebes Sea at a depth of 2.8 kilometers (1.7 miles).

“I was really excited,” Osborn said of her first glimpse. “It was so tantalizing because the animal was so different from anything previously described, with the fantastic headgear.”

Squidworms live about 100 to 200 meters above the ocean floor, a layer rich in undiscovered fauna and flora, scientists say.

“I would estimate that when exploring the deep water column, more than half the animals we see are undescribed or new to science,” Osborn said in an email.

Up to now, this region has been largely inaccessible because tools for collecting samples either scraped along the ocean floor, or mangled specimens so badly that they were useless or unrecognizable once brought to the surface.

The squidworm, Teuthidodrilus samae, does not appear to be a predator, feeding instead on bits of so-called “marine snow,” a mix of sinking microscopic plants and animals, faecal material and cast-off mucus.

“Not the most appealing sounding food, but the large aggregates are rich in nutrients to feed on,” Osborn said.

The Celebes Sea, a deep pocket basin isolated from surrounding deep water, is part of the Coral Triangle, a conservation hot spot due to its diverse lifeforms and unique geological history.

The squidworm is so different from known animals that it required the creation of a new genus, the level above species in the taxonomical ladder for classifying animals and plants.

The study was published in Biology Letters, a journal of the British Royal Society.