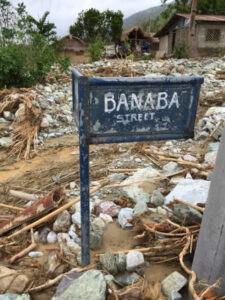 This used to be a street. Rocks cover a street in Barangay Calabasa, Gabaldon town. (MNS Photo)

MANILA, Oct. 20 (Mabuhay) — Stormy weather will continue to prevail in Northern Luzon as severe tropical storm “Lando” has maintained its strength as it moves slowly in the northeast direction, according to Philippine Atmospheric, Geohysical and Astronomical Services Administration on Tuesday.

As of 4 a.m. Tuesday, the center of severe tropical storm Lando was estimated — based on all available data — at 130 km northwest of Laoag City, Ilocos Norte (19.0°N, 119.7°E) packed with maximum sustained winds of 95 kph near the center and gustiness of up to 120 kph. It is forecast to move northeast at 5 kph.

Residents in low lying and mountainous areas under storm warning signal are alerted against possible flashfloods and landslides.

Storm surge may reach a maximum of up to 1.5 meters in the provinces affected by the severe tropical storm.

The estimated rainfall amount is from heavy to intense within the 600-km diameter of the severe tropical storm.

For Tuesday forecast, PAGASA said stormy weather is expected over the provinces of Ilocos Norte, Ilocos Sur, Abra, Apayao, Batanes, Northern Cagayan including Calayan and Babuyan group of islands while rains with gusty winds will prevail over Nueva Vizcaya, Isabela and the rest of Ilocos, Cordillera and Cagayan.

It added moderate to strong winds blowing from the northwest to west will prevail over the rest of Luzon and coming from the southwest over Visayas and Mindanao with moderate to rough seas.

The state-run weather bureau also issued a gale warning because of the presence of severe tropical storm Lando as the sea condition would be rough to very rough due to strong to gale force winds expected to affect the seaboards of Luzon and Visayas.

“Fishing boats and other small seacraft are advised not to venture out into the sea while larger sea vessels are alerted against big waves,” it warned. (MNS)

DUTERTE UNBOTHERED BY RUMORS ABOUT TROOPS’ WITHDRAWAL OF SUPPORT