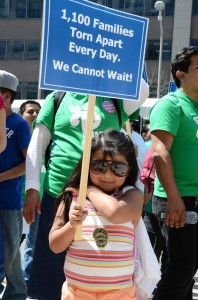 She may not exactly know the real numbers, but this little girl sure does feel to be abandoned if a parent is deported while she remains because she’s a U.S. citizen. (Photo from the Facebook Page of Reform Immigration FOR America)

WASHINGTON, May 6, 2013 (AFP) – Immigration reform to be debated in the US Congress would add $6.3 trillion to the deficit over the long term, a conservative think tank says in a study released Monday.

The report by the Heritage Foundation was made public a day before the period opens for amendments to be proposed to a bill presented jointly by eight senators, four from each party.

The bill creates a path to citizenship for the approximately 11 million people living in the United States illegally, but under certain conditions and after a 13-year wait, during which time they will not be entitled to any government aid.

The Heritage Foundation study argued that while illegal aliens will start to pay taxes once they register legally, when they become citizens they will be net recipients of government funds.

The study said formerly illegal aliens will receive those benefits for 50 years, if one includes their retirement pension, and says their cost to government coffers will be $9.4 trillion, while they will pay $3.1 trillion in taxes.

“They would generate a lifetime fiscal deficit (total benefits minus total taxes) of $6.3 trillion,” the study said.

It is an updated version of a text whose publication in 2007 helped derail the last attempt at immigration reform in Congress.

“If amnesty is enacted, the average adult unlawful immigrant would receive $592,000 more in government benefits over the course of his remaining lifetime than he would pay in taxes,” said the report, which shuns the term immigration reform.

It added that numbers did not take into account relatives that legalized immigrants might bring over to the United States from their native countries.

Another conservative study, by Republican Senator Jeff Sessions, who opposes the reform, said that over the long term the bill will actually benefit 30 million people.

The bill, which is backed by President Barack Obama, establishes a five-year path to citizenship for young people who came to the country as children, larger entry quotas for workers with advanced degrees and for farm workers. It also creates a new category of non-skilled workers.

“Many conservatives believe that if an individual has a job and works hard, he will inevitably be a net tax contributor (paying more in taxes than he takes in benefits). In our society, this has not been true for a very long time,” said the Heritage Foundation study.

LA’s 10th Annual Go Red For Women luncheon asks ‘Who Do You Go Red For?’