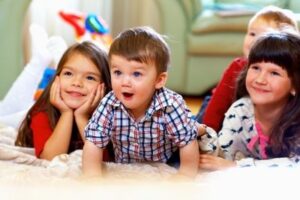 (Relaxnews) – While adults’ memories fade over time, kids can recall information in even better detail than they did just after learning it, according to a new study.

“An implication is that kids can be smarter than we necessarily thought they could be,” says co-author Kevin Darby of Ohio State University (OSU) in the US. “They can make complex associations, they just need more time to do it.”

In the study, 82 four and five year olds were observed playing a video game that involved learning the associations between pictures.

The game flashed pairs of objects — a baseball cap and a rabbit, for example — each object associated with a fictional owner such as Mickey Mouse or Winnie the Pooh.

The object was to match each pair of objects with its owner, using their memory, which came easily to the children, whose overall scores rose from 60 percent to 90 percent at the end of the trial.

After playing the game once, the researchers mixed up Mickey and Pooh’s belongings, requiring the kids to learn a new set of associations, and asked them to replay the game immediately.

Again, they scored in the same pattern, starting out at 60 percent and finishing at 90 percent, yet the researchers wondered if they still remembered the associations from the first time they played.

Half the kids played another round, this time with the same associations they had learned in the first game, and experienced a phenomenon called “extreme forgetting,” which the study is thought to be the first to demonstrate.

Following the same 60 to 90 percent pattern of the two previous games, the kids appeared to have completely forgotten the first round of associations, according to the study.

“It seems surprising that children can almost completely forget what they just learned, but then their memories can actually improve with time,” says lead author Vladimir Sloutsky of OSU.

Two days later, the remaining half of the kids came back to play again, and their scores started at nearly 85 percent, more than 20 percent higher than the scores of their counterparts who had replayed the game immediately afterwards.

“We know from previous research that kids struggle to form complex associations in the moment, so we thought that with some time off and periods of sleep they might be able to do better,” says Darby. “And it turned out that when they had time to absorb the information, they did better.”

Sloutsky, whose study will appear in an upcoming issue of Psychological Science, likens learning the associations in the game to learning rules, schedules and routines in real life.

He cautions, however, that parents should not interpret his study to mean that kids are able to tackle adult material as long as they get time to absorb it.

“We’ve shown that it’s possible for children’s memories to improve with time, but it’s not like we uncovered a method for super-charging how much they can remember,” says Sloutsky. “The takeaway message is that kids can experience extreme forgetting, and the counter-intuitive way to fight it is to let time pass.”