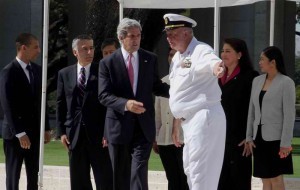 United States Secretary of State John Kerry prior to the wreath-laying ceremony at the Manila American Cemetery and Memorial in Global City, Taguig on Tuesday (December 17). Kerry was in the Philippines for a two-day visit where he met with President Benigno Aquino III and also flew to typhoon-ravaged Tacloban to inspect damages in the area caused when Typhoon Haiyan hit the country last month. (MNS photo)

“This is a devastation unlike anything that I have ever seen at this scale,” Kerry said while visiting a temporary US aid supply depot for survivors of Super Typhoon Haiyan in the central city of Tacloban.

“It really is quite stunning. It looks like a war zone in every respect and for a lot of people it is,” he told reporters.

Tacloban, a city of 220,000 people, bore the brunt of Haiyan’s fury last month as towering tsunami-like waves whipped up by the storm obliterated its coastal districts.

Nearly 8,000 people were killed or remain missing in central provinces, with Tacloban accounting for more than 5,000 of the total.

“Entire communities leveled, water up to the second storey of the airport tower, and all of this covered in water,” Kerry said, gesturing toward tents during his visit to the US Agency for International Development depot near Tacloban’s airport.

He said President Barack Obama had sent him to offer condolences and assure Filipinos of unwavering efforts in assisting them.

Two US firms, Procter and Gamble and Coca-Cola, will help repair, restock and reopen more than 2,000 small groceries in typhoon-hit areas, it added.

“Last month’s typhoon broke the world’s heart, but what is certain is that it didn’t break the spirit of the people here,” Kerry stressed.

The United States, a long-time military ally of the Philippines, sent an aircraft carrier group and committed 1,000 Marines in a massive aid airlift in the desperate first few days after the typhoon, when Tacloban and other areas were cut off by road.

The still impoverished Philippines is battered by an average of 20 storms a year, and Filipinos have long had to deal with weather-related disasters as best they can.

But the fury of Haiyan, with its maximum 315 kilometre (195 mile) per hour winds, was unprecedented

It wrecked 1.2 million homes, caused some $12.9 billion in damage and left 4.4 million homeless, according to the Philippine government.

In terms of fatalities it is now second only to a tsunami which hit the major southern island of Mindanao and left between 5,000 and 8,000 people dead following a major undersea quake in 1976.

With nearly six million jobs lost, Haiyan may also trim economic growth by 0.3 percentage points this year and next, according to a recovery plan released by the economic planning department.

The plan, launched by President Benigno Aquino on Wednesday, calls for spending of 360.9 billion pesos ($8.17 billion) over four years.

The government is allocating a total of 125.1 billion pesos and appealing for help to fund the remainder.

Aquino said most of the money would be used to rebuild communities to withstand disasters better.

“The task immediately before us lies in ensuring that the communities that rise again do so stronger, better and more resilient than before,” he told foreign diplomats and aid officials in Manila.

Aquino thanked the global community for the outpouring of support but stressed there is still much more to do.

“Your help is all the more necessary today, because in confronting the escalating effects of climate change, the resources of countries like the Philippines will be strained to the limit,” he said.

Across Tacloban many remain homeless and are living in crowded camps or in temporary shelters made from scrap wood and tarpaulin.

A faint stench of decay hangs in the air, almost six weeks after the tragedy, and authorities are still struggling fully to restore some essential services as Christmas approaches.

“We are trying to get the Christmas spirit up, but it is not easy when you’ve lost relatives,” said Catholic priest Amadeo Alvero, who administered last rites to hundreds of dead or dying victims in the immediate aftermath of Haiyan.