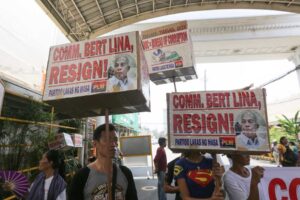 MANILA, Aug 27 (Mabuhay) – An association of sugarcane planters and sugar millers on Thursday called for the resignation of Customs Commissioner Alberto Lina, claiming smuggling has become rampant under his watch.

“All I know is [during the time of] the old commissioner, walang smuggling. Bakit nung siya na, ang daming smuggling? We will not allow that. He has to step down. Kung hindi niya kaya, alis siya,” said Manuel Lamata, president of the Sugar Alliance of the Philippines.

Lamata made the call after 57 container vans full of smuggled sugar from Thailand worth P85 million were confiscated by the Bureau of Customs’ intelligence group.

Customs Deputy Commissioner Jessie Dellosa, who heads the BOC intelligence group, admitted in the same report that corruption has worsened under Lina’s term as the current commissioner is more focused on taxing harmless shipments such as balikbayan boxes instead of going after big-time smugglers.

Dellosa, a former military general, said corruption flourished under the ‘tara’ system, or the use of grease money by importers to bribe corrupt Customs personnel.

The report said Lina is set to hold a press conference on Thursday afternoon to address the calls for his resignation.(MNS)