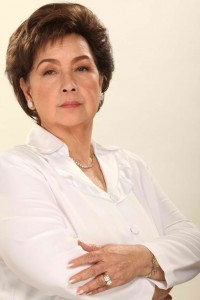 MANILA, Apr 24 (Mabuhay) — After the phenomenal success of “Walang Hanggan,” Susan Roces announced Saturday that she will do another TV series for ABS-CBN.

At the sidelines of an all-star dinner benefit hosted by Regal Films matriarch Lily Monteverde for the senatorial bid of Roces’ daughter Grace Poe, the veteran actress said she is excited to do another project which will challenge her acting mettle in her senior years.

Roces said the project will be a three-generational drama, which will start filming this summer. She declined to reveal further details about the new show, saying she does not want to preempt the network.

Meanwhile, the 71-year-old movie queen said she is in good health and does not need stem cell treatment, which is an in-demand procedure in showbiz.

Gerald, Maja agree to do project together