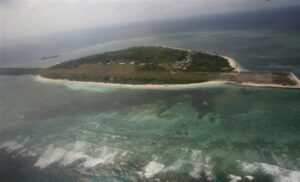 MANILA (Mabuhay) – Three out of five Filipinos or 62 percent have little trust in China amid the territorial row between Manila and Beijing, according to a survey by Social Weather Stations.

SWS said the survey conducted June 5 to 8 also found 17 percent of Filipinos have much trust in China.

This accounted for a record-low net trust of -45 that the pollster classified as “bad.”

“China’s lowest net trust score of -45 surpassed the previous record-low of -36 in June 2014, May 2012, and June 1995 during the Mischief Reef confrontation between the Philippines and China,” SWS said.

The Philippines had taken the dispute before an international tribunal, with China refusing to take part in such proceedings.

In contrast, the survey showed a “very good” +64 trust rating for the United States, and a “good” +36 for Australia.

“United States, in particular, has been enjoying positive net trust ratings since December 1994, ranging from moderate +18 in May 2005 to excellent +82 in December 2013,” SWS said.

It added Australia has scored positive net trust ratings since April 1995, ranging from neutral +3 in September 1995 to very good +55 in August 2012.

On the other hand, net trust in Saudi Arabia was a poor -19 in August 1994 before it rose to neutral -5 in March 2008, then stayed in neutral territory.

“A single-digit net satisfaction is considered not significantly different from zero,” SWS said.

Also, the SWS survey showed 51 percent of Filipinos paid close attention to news reports on “the events regarding the conflict between the Philippines and China about who owns the islands in the West Philippine Sea.”

The SWS added the Philippine-China dispute was the fifth most followed news event of 14 news events tested.

Some 51 percent followed the issue very closely or somewhat closely, compared to 52 percent for events regarding the K to 12 program (fourth); 57 percent for the case of OFW Mary Jane Veloso in Indonesia’s death row and the court trial of suspected pork barrel scam mastermind Janet Napoles (tied second and third); and 78 percent for the bout between Emmanuel “Manny” Pacquiao and Floyd Mayweather Jr. last May 3 (first).

The sixth most followed was the trial on the Maguindanao massacre (50 percent); and the Senate investigation on alleged anomalies in the construction of a building in Makati City when Vice President Jejomar Binay was still Mayor of Makati (48 percent) was seventh.

Eighth was the court trial on the case of former President Gloria Arroyo (46 percent), and ninth was the earthquake that devastated Nepal (44 percent).

“On the other hand, China’s net trust scores were mostly negative, ranging from neutral -1 to the record-low bad -45,” it said.

Also, it said China’s net trust rating ranged from bad to poor during the first Mischief Reef confrontation between the Philippines and China in 1995.

China’s net trust rating again fell to bad levels in June 1999 during the second Mischief Reed incident (-32), and in December 2008, after the news on melamine contamination of milk from China, (-33).

The survey was held June 5 to 8, using face-to-face interviews of 1,200 adults nationwide, 300 each in Metro Manila, Balance Luzon (Luzon minus Metro Manila), Visayas and Mindanao.

Sampling error margins of 3% for national percentages, and 6% each for Metro Manila, Balance Luzon, Visayas and Mindanao, applied to the survey.

The exact questions on public trust in selected countries include:

On public attention to news, the exact questions are:

Grace Poe to revisit ‘highlights of fraud’ in 2004 polls

Is Grace Poe American or Filipino?