Aquino reported in his State of the Nation Address the readiness of the blue print for the rehabilitation and recovery plans for Cebu, Iloilo, Eastern Samar, Leyte and Tacloban City. Some P28 billion has been earmarked for the project.

More than eight months after Super Typhoon Yolanda hit land, over 2,000 families still live in the tent cities and more than 8,000 families need to be relocated from the no-build zones. One of the most disastrous typhoons that visited the Philippines in recent time, Yolanda killed thousands and left millions homeless.

Local executives of Tacloban City welcome Tacloban Recovery and Rehabilitation Plan (TRRP) in a city that used to earn P800 M a year and was down to P620 but urged “to please hurry” as the residents are becoming “frustrated day by day”.

For his part, Tacloban City Mayor Alfred Romualdez whose own family had its share of misfortune from the November Super Howler, is rallying his townmated to accelerate the rebuilding effort and was in Southern California at the Josephine Restaurant in Cerritos over the weekend  upon the invitation of Tacloban CityAssociation whose members have relatives  in the Philippines similarly stricken. Accompanied by his wife Cristina, a former screen actress and now a politician herself, they were embraced and welcomed by their townmates at the event.

The reassuring presence of the Tacloban executive and his wife had local Taclobanons feel confident that something is being done to alleviate the conditions of their families and relatives back home.

The nature of giving 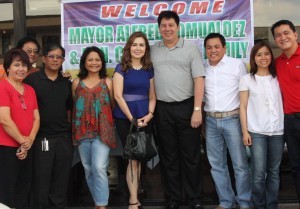 Tacloban City Mayor in Cerritos: Mayor Alfred Romualdez of Tacloban City and his wife Cristina visited Cerritos upon the invitation of Tacloban City Association of California and gave an update of the rehabilitation and rebuilding efforts in province brought about by Typhoon Yolanda more than eight months ago.

Calamities highlight the people’s propensity to be more generous to a point that their giving strikes to the bottom of the real significance of giving, that is, when giving really hurt. When Typhoon Yolanda devastated the Philippines in November last year, the very first respondents to help the people affected by the unusually strong typhoon from around the world were the better off. As if on cue, the wealthier benefactors had their resources shipped to the devastated areas even catching the recipient country by surprise if one looks on the logistics readiness of the rescue efforts.

As the damages became known, more help was flown, not only material forms but volunteer workers themselves who were unmindful of the inconveniences and hardship they would encounter.

What really drives people to help those in need?  Who gives the most to charity?

Closer to home, that is, in California, one might be surprised that “people in the poorer areas often gave more to charity than their rich counterpart.

Vacation Bible School to Mexico: Close to a hundred children from three churches attended the annual Vacation Bible School spearheaded by the Education Ministry of the Cornerstone Christian Fellowship of Orange County, a Filipino-American church. The project will be brought to an ethnic hill tribe in Mexico by the teaching group of Sis. Gigi Martinez and Orange M. Andres and their crew this August.

In Orange County composed of 34 cities, “affluent residents of Ladera Ranch is the least generous zip code, based on adjusted gross income and amount given on returns, with the residents contributing 3.42 percent of their income”.

In Los Angeles county, the most generous zip codes are in the Compton area, Koreatown,  and Westlake. The least generous are in Playa Vista, Topanga, Calabasas, Glendale and Redondo Beach.