Tagle: No progress if people are still poor 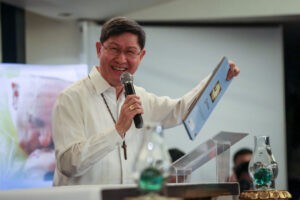 Manila Archbishop Luis Antonio Cardinal Tagle beams with pride at the launching on Thursday of “I am here to be with you,” the official book on the visit of Pope Francis to the Philippines. The book contains photographs on the visit and a story written by Cardinal Tagle. (MNS photo)

MANILA (Mabuhay) – Manila Archbishop Luis Antonio Cardinal Tagle said voters should elect leaders who care for the environment and have clear platforms of action on the issue.

Tagle spoke at a forum on the papal encyclical on the environment in which Pope Francis urged people to care for the Earth.

The destruction of the environment is seen as the cause of disasters caused by global warming and climate change and Tagle says the Philippines will experience more of these disasters unless efforts to mitigate them are done now.

“We should ask candidates to present views and platforms in the area of environment but we should watch out because platform related to environment will have political, business component. All of those will have to be revealed,” he said.

Tagle also questions pronouncement regarding the country’s rapid economic growth, saying it’s not really progress if many people are still poor and the environment is being neglected.

“They say there is real growth but what type of growth is it if the great majority of people do not benefit? Can you consider that growth?”

“What type of development is it if natural resources is in disarray? Is that development?” (MNS)

GMO 101: What you need to know about genetically modified foods

US gun sales thrive in any economy

No interest to be president, says Duterte minutes before deadline