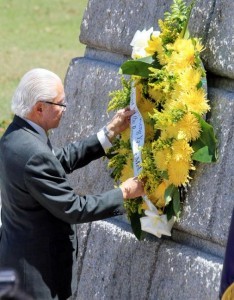 Singapore President Tony Tan Keng Yam lays wreath at the monument of national hero, Dr. Jose Rizal, on Thursday (April 03, 2014) at the Luneta Park in Manila. The Singaporean President is on a 4-day state visit in the Philippines. (MNS photo)

“I am confident that your administration’s efforts will further spur growth and bring greater prosperity to the Philippine people,” President Tan said during the State Luncheon hosted by President Benigno S. Aquino III.

“It will also present more collaborative opportunities for Singapore businesses keen to be part of the Philippine success story,” he added.

President Tan mentioned in his speech how most Singaporeans are attracted by the Philippines’ strong growth prospects, and are seeking economic opportunities in the country.

“Our people-to-people ties are robust. Growing air connectivity has been an important catalyst, not only for trade and business, but also tourism between our countries,” he said.

He also noted how through President Aquino’s leadership, the Philippines has made tremendous progress and the Philippine economy is consistently one of the strongest in Asia.

“Investments inflows are growing as a result of burgeon business confidence. These resulted from your resolute commitment to enhance the level of social economic development in the Philippines,” President Tan said.

He expressed delight noting the recent expansion of our Air Transport Agreement would increase the weekly air services capacity between Singapore and Manila by at least 25 percent.

“The Philippines’ charming cities and beautiful beaches will then be just a quick plane ride away for Singaporeans,” he said.

At the regional level, President Tan said that the Philippines and Singapore share an interest in building a strong and united Association of Southeast Asian Nations (ASEAN) community.

“Warmer landscape has evolved since the time when we were founding members of ASEAN. The strategic imperatives remain unchanged,” he said.

“In fact, these imperatives have grown more compelling in the face of new challenges confronting our region. This makes a task of achieving an ASEAN community in 2015 all the more urgent as Singapore looks forward to working closely with the Philippines to advance our common regional interest,” he added. (MNS)

Koko warns PCA about banned toxins being used against cocolisap