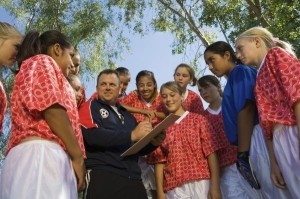 A new study links kids involved in multiple team sports with a reduced risk of being overweight. Â©bikeriderlondon/Shutterstock.com

(Relaxnews) – When it comes to tackling childhood obesity, new research out of the US finds that kids who play on several sports teams are nearly 40 percent less likely to be obese.

“Team sport participation had the strongest and most consistent inverse association with weight status,” wrote researcher Keith M. Drake, of the Hood Center for Children and Families at Dartmouth in Lebanon, New Hampshire, and colleagues in Pediatrics, in a study published July 16. “Obesity prevention programs should consider strategies to increase team sport participation among all students.”

The researchers also found that teens who walked or biked to school more than three days a week had a 33 percent lower risk of obesity than those who took the bus or rode in a car.

In the study, researchers surveyed 1,718 New Hampshire and Vermont high school students and their parents about their daily habits, diets, weight, and physical activity.

Other factors associated with a lower risk of being overweight or obese included extracurricular physical activity and eating fruits and vegetables.

A separate study published this March in the journal Obesity finds that the number one way parents can help an obese child lose weight is to lose weight themselves. In the study, parents who served as role models and shed weight themselves proved to be the most inspiring and motivational method for their own children — more than making changes to the home food environment or enrolling kids in physical activities, researchers said.