MANILA, November 22, 2010 (AFP) – The Catholic Church’s easing of a condom ban sparked fierce debate in the Philippines on Monday, with family planning advocates saying it would help to finally pass a law promoting contraceptives.

Pope Benedict XVI’s comments that using condoms could be justified to stop the spread of AIDS dominated the front pages of newspapers in Asia’s bastion of Catholicism, which also has one of the world’s fastest growing populations. 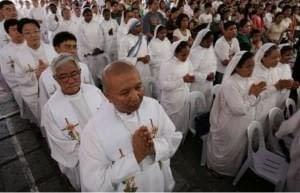 President Benigno Aquino and other contraceptive advocates said the pope’s remarks would help overcome church resistance to a bill that would compel the government to supply the poor with condoms.

“Our clergy cannot be more popish than the pope,” Aquino’s spokesman, Ricky Carandang, told reporters when asked whether Benedict’s comments would bolster momentum for the passing of the reproductive health bill.

Congresswoman Janette Garin, one of the authors of the bill, said the pope’s remarks — easing the Vatican’s blanket ban of any prophylaxis other than abstinence — gave out mixed messages on the church’s position.

“It makes passage of the bill a lot easier because people would see the confusing stand of the church,” Garin told AFP.

“The educated and those who are confused about the bill will realise we (family planning advocates) are concerned about the community while they (the bishops) are simply holding on to a Stone Age belief.”

However the Catholic Church, a powerful institution in the Philippines that has helped lead revolutions, insisted the pope’s comments had been misinterpreted.

“The Holy Father’s latest teaching on condom use does not in any way change the position of the church against artificial contraception,” said Monsignor Juanito Figura, secretary-general of the country’s Catholic bishops association.

The latest bill, introduced in July, is the fifth attempt by family planning advocates since 1998 to pass a law that would require the government to make condoms available to the poor, and to educate them about contraceptives.

The family planning lobby say such a law is needed to help contain a population that has doubled to 94 million in just three decades, and is still growing at 1.8 percent a year according to World Bank figures.

But Figura insisted the pope’s comments had nothing to do with family planning.

“He speaks of condom as a permissible tool, not the primary tool, to arrest further spread of the HIV virus. Condom use is not the moral solution to the alarming spread of the virus and disease.

“Neither does the Holy Father speak of it (condom use) in the context of population issues,” the monsignor said in a statement.

The church, which counts 80 percent of Filipinos as followers, has mounted strong campaigns against politicians who backed previous versions of the bill, and has vowed to do so again.

After Aquino, a 50-year-old bachelor, came to power on June 30 promising to back the reproductive health bill, some bishops warned he could be excommunicated.

However the bishops backed away from their threat and family planning advocates say they have their best hope of passing the bill with Aquino – who has record popularity ratings – in the presidential palace.