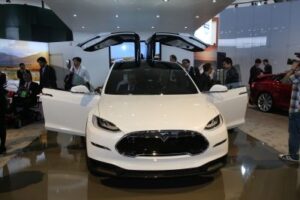 (Relaxnews) – Invitations were sent out to the media on Monday for the launch of the car manufacturer’s Model X electric crossover SUV.

Tesla’s third car was first shown three years ago, but has experienced several delays. On Monday, September 21, invitations were sent out for a press launch, featuring the silhouette of the long-awaited crossover on the cover complete with falcon doors forming the “X” shape.

The Model X crossover follows on the heels of the Tesla Roadster and Model S sedan. Its shipping date had already previously been announced as September 29, in order to meet the company’s end-of-the-month deadline.

The launch will take place at Tesla’s factory in California at 7 pm.