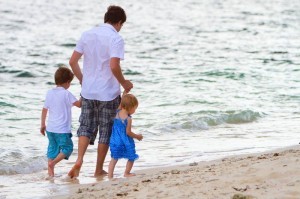 WASHINGTON, Sept. 13 (AFP) â€“ Men experience a drop in testosterone after the birth of their children, a phenomenon that may help them meet the challenges of caring for their offspring, said a study released on Monday.

Testosterone is a hormone that fuels male sexuality, aggression and physical robustness, and is typically highest in young, single men with no children, said the research in the Proceedings of the National Academy of Sciences.

With less testosterone coursing through their veins, men are more likely to adopt fatherly roles and help nurture their children, a particular need among humans who have much longer dependent childhoods than other mammals.

â€œRaising human offspring is such an effort that it is cooperative by necessity, and our study shows that human fathers are biologically wired to help with the job,â€ said co-author Christopher Kuzawa of Northwestern University in Illinois.

The research was based on 624 men, age 21-26, in the Philippines who were tracked for nearly five yearsâ€”a period in which some of them entered stable relationships and became new fathers.

Of those who started the study single and became fathers by the end of it, the men with the highest initial testosterone levels were more likely to have become dads.

This distinction was important because previous studies had not been able to establish whether a testosterone dip observed in newly married men was a trait that made men more likely to marry, or if it resulted from the act of partnering.

â€œThe men who started with high testosterone were more likely to become fathers, but once they did, their testosterone went down substantially,â€ said co-author Lee Gettler, a doctoral candidate in anthropology at Northwestern.

â€œOur findings suggest that this is especially true for fathers who become the most involved with child care.â€

Men who became fathers during the study showed a median 26 to 34 percent drop in testosterone levels, which was significant compared the normal age-related decrease seen in single men who were not fathers (12-14 percent).

The steepest declines were seen in fathers of newborns, one month old or younger.

â€œFatherhood and the demands of having a newborn baby require many emotional, psychological and physical adjustments,â€ Gettler said. â€œOur study indicates that a manâ€™s biology can change substantially to help meet those demands.â€