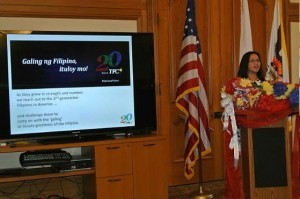 SAN FRANCISCO, CA – It was a reality check statement that caused a respectful hush to fall over the crowd of public officials, media, community leaders and volunteers that gathered at the Community Kick-Off for Pistahan Parade & Festival of the Filipino American Arts Exposition (FAAE), held recently at the Mayor’s Conference Room of San Francisco City Hall:

“A key current population fact that impacts us today is out of the estimated 3.5 million Filipinos in the U.S., 49 percent or nearly half is comprised of second generation Filipinos.”

ABS-CBN North America Managing Director Olivia De Jesus, after citing figures from the 2010 U.S. Census and pertinent research surveys on this growing segment of Filipinos who are born or raised in the U.S., posed these questions for reflection:

“How do we reach out to the next generation of Filipinos in a way that is meaningful and impactful to them?

“Who do we partner with that share common objectives of serving the Filipinos, have the credibility and expertise to engage with this generation and represent its interests?

“Where can we launch an outreach initiative that captures the vision and mission of TFC and honors the legacy of Pistahan in San Francisco?”

Applause greeted these questions from De Jesus, recently chosen by FAAE as the Hermana Mayor, an equivalent of Grand Marshal, of the 2014 Pistahan Parade & Festival at Yerba Buena Gardens in San Francisco, scheduled for August 9-10, 2014.  She was presenting the case for her Pistahan Legacy Project, a requirement by FAAE from those who have held the position of Pistahan’s Hermano and Hermana Mayor.

For years, ABS-CBN’s The Filipino Channel (TFC), the world’s largest 24-hour Filipino multiplatform news and entertainment network, has been a solid partner of Pistahan, billed as the largest annual two-day celebration of Filipino culture and pride in the U.S.  As De Jesus mentioned in her presentation, TFC has observed the growing presence and influence of the younger Filipino American leadership and volunteer network of the event, even if mostly first generation Filipinos still attend it.

“This ‘next gen’ has been driving a major Filipino cultural event in a big city like San Francisco year in and year out,” said De Jesus. “We need to contribute a platform to continue encouraging and expanding such involvement, allowing them to nurture their talent and express their ideas in serving the Filipino.”

Perhaps it’s the universe creating synchronistic meets among the like-minded that TFC has found a fitting partner for its outreach to the ‘next gen’ in a youthful team of social innovation junkies calledNextDayBetter.

Its New York-based Filipino American CEO and Chief Builder and Fulbright Scholar Ryan Letada, whose life goal is “to squeeze social good out of awesome ideas”, explained in a nutshell: “NextDayBetter is a culture platform that builds and activates diaspora communities literally to make the ‘next day better’.”

NextDayBetter’s Head of Partnerships John Paul “JP” Capulong, a Filipino American and Bay Area native, represented his team at the Pistahan Community Kick-Off and shared:  “Our team has been travelling to key cities in the world to create hubs for innovation, bring thinkers and change makers together to share their stories, ignite meaningful conversations and purposeful actions to create a better future.”

A better future is made up of better lives for people.  This is the vision of ABS-CBN Foundation International (AFI), the U.S.-based non-profit, non-governmental philanthropy arm of ABS-CBN dedicated to improving the lives of disadvantaged Filipino families in the Philippines and around the world.

Managing Director Jo Ann Kyle emphasized its mission: “While the Foundation has almost become synonymous to its popular programs, Bantay Bata (Child Watch) and Sagip Kapamilya (literally Family Rescue) which has raised millions of dollars to assist calamity victims in the Philippines, we commit to improve the quality of life of every Filipino generation and make a significant impact in the strategic areas of child care, environment, education, disaster management and community development. We do this by leveraging the power of media and partnering with concerned sectors of society.”

No less than FAAE President and San Francisco Entertainment Commissioner Al Perez, who is a self-described 1.5 generation Filipino, personally relayed his gratitude to the Foundation for the Pasig River rehabilitation work it did in his hometown, Sampaloc, Manila.

“Through AFI and its many advocacy programs, we give the Filipino youth in the U.S. the opportunity to build ideas and to work on concrete solutions for causes closest to their hearts,” she said.  “Through the expertise of NextDayBetter, we create a credible platform for ‘next gen’ thinkers and change makers to connect, engage and exchange ideas and inspire action. For the venue, we will get inspiration from the imaginative San Francisco landmark, Children’s Creativity Museum, at the Pistahan grounds in Yerba Buena Gardens.”

De Jesus announced: “So, come August 9, the first day of Pistahan Parade & Festival, at the Children’s Creativity Museum, TFC will present its Pistahan Legacy project – the first ever TFC Speaker Salon powered by NextDayBetter.  It will have expert speakers and resource persons with a program designed to provide the ‘next gen’ Filipinos with inspiration and insights on innovations, breakthroughs and challenges in areas such as the advocacy programs of AFI, with a focus on building better lives and future for Filipinos.”

De Jesus, Capulong and Kyle promised a unique experience for attendees of this historic TFC Speaker Salon.  “It won’t be just talk,” said De Jesus.  “NextDayBetter-powered speaker salons are a learning space, a discovery theater and a Filipino cultural showcase for the senses.  We invite the ‘next gen’ to speak out! Get involved, let your passion and creativity ignite impactful action, and be the change that the global Filipino community needs.”