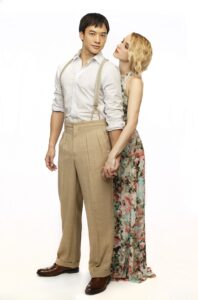 WATERFALL is an epic love story, set in Bangkok and Tokyo between the turbulent years of 1933 and 1939, as a monarchy falls in Thailand and Japan is on the brink of war. A young Thai student (Sukrit) falls in love with the American wife (Padgett) of a Thai diplomat (Sesma), and the story of their forbidden love parallels history as the new democracy of Siam moves into the vortex of Japan prior to WWII. With a gloriously romantic score, WATERFALL is a modern love story of timeless scale.

WATERFALL marks a groundbreaking collaboration between American and Asian theatrical artists. The musical, based on a contemporary classic Thai novel, Behind the Painting by Sriburapha, features book and lyrics by Tony Award-winner Richard Maltby Jr. and music by Oscar-winner and two- time Tony Award nominee, David Shire. The production will be directed by Broadway and Thai theatrical impresario Tak Viravan and co-directed and choreographed by Tony Award-nominee Dan Knechtges. Casting for WATERFALL is by Stewart/Whitley.

Sheldon Epps, Artistic Director of The Pasadena Playhouse, says, “We are blessed to have brought together a tremendously gifted company for this world premiere production. I know that this gifted group of actors will offer their vitality and energy to this wonderful material and that they will bring this beautiful and romantic story to life. I look forward to having this dazzling cast on our stage and I know that they will provide a wonderful finale to a truly terrific season.”
Director Tak Viravan of WATERFALL, says, “I am so excited and thrilled to be working with this beautiful and talented cast, and I feel blessed to be among this amazing creative team, many of whom I have been idolizing ever since I knew musical theatre. WATERFALL has been a wonderful journey, and I’m sure will continue to be so. I hope its beauty will touch everyone who comes to experience it. It is such a beautiful and special world.”

Tak Viravan is the leading figure of Thailand’s burgeoning theatre scene, where he has directed 14 musicals and plays and has presented many international touring productions. WATERFALL is adapted from an earlier musical, Behind the Painting, which Viravan directed in Thailand. He has also been a producer for several Broadway musicals, including the Tony-nominated revival of How to Succeed in Business Without Really Trying (2011) and Nice Work If You Can Get It. Viravan is one of the most prominent and influential figures of Thailand’s entertainment industry, where he is also known as a television producer/director and for music and artist management.

Thai superstar Bie Sukrit (Noppon) will make his American stage debut in WATERFALL. From his discovery in 2006 on the Thai television talent contest, “The Star,” Bie has become one of Thailand’s most famous and recognizable young talents, starring on stage, screen and television. As a recording artist, his credits include several top-selling albums and sold out concert tours. Bie created the role of Noppon in the musical Behind the Painting, the earlier version of WATERFALL.

White on the outside, brown on the inside

Kris Aquino not keen on looking for new love