Thankful for the presence of Father-figures around

Growing-up without a father to love and protect us is devastating for some, but not when one is surrounded with father-figures around. Among the father-figures whom this author have learned to respect and admired was a respectable uncle who was the Dean of Physics at our hometown’s trade school

. His name was Ricardo Oquendo – Rimando and he hailed from Agoo, La Union.

He was a distinguished and well respected educator, but at home, he was just a simple man – the loving husband of my aunt, my mother’s sister who protected and helped raised us, his nephews and nieces, like his own children. Though he was not from our hometown, he was well-loved by everyone not only for his quiet demeanor but for his eloquence once anyone is left in the room with him.

Tio Rim, as  we all called him, was also a religious man who went to Church every day, along with my aunt, Tia Meding. We all looked up to him like our father, as he once led the group of Knights of Columbus religious organization. However, in spite of his distinguished hometown image, he was the most loving and humble man in our household. He relentlessly built one of the largest water stations in town and I’ll never forget an evening when I found him in their room, ironing his wife, Tia Meding’s newly-washed clothes and when he’s done, he went on to sew and hem some of her clothes. That sight left such an indelible mark in my memory, leaving me with nothing but pure respect and admiration for such a great man, who loved his wife unconditionally. 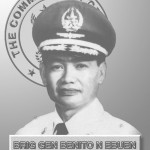 Uncle Bening, was another uncle, the first cousin of my mother, a seasoned pilot who used to fly down from Manila to come and visit us. He was more popularly known as Brigadier General Benito N. Ebuen, the former President Magsaysay’s personal pilot who perished with the President’s plane crash in 1957. He too, was a family man. Though he and Auntie Betty had eight sons and weren’t blessed with a daughter,  I became the daughter they never had. He would shower me with expensive toys and he was the first person who brought me to the airfield, when I was around seven years old and it was at the airfield where he taught me how to drive his Army Willy’s Jeep which had a standard stick shift gear. And to this day, whenever I have the opportunity to drive a car with a stick shift gear, I always remember him as he was not just a mentor, but a dear and loving man.

A first cousin, by the name of Justito “Amang” Parong was my protector growing up. He was a couple of years older than me but he was “always there” for me. He used to protect me from all the burly bullies in town and he was a real buddy. He was by my side when we almost drowned on a capsized bamboo rafter during a swimming trip with the Legion of Mary religious group and we were both lucky, we had our Tia Meding with us, who scooped both of us from drowning.

My buddy, Amang and I would sneak out of the ancestral house whenever our Mothers (his Nanay was my mom’s sister) host large parties and we would then drink beer on the way to their house, so no one would see us savor and taste the grand beverage. On moonlit evenings, we would ride our bikes and go to the forest to look for fireflies or play by the hay behind our Rice Mill. Those were memories of simple life in our hometown. Such irreplaceable memories of learning, love and thankful for the presence of the three father-figures I had around.

To all of you who are lucky to have your Dad’s by your side, show them your love and hug them tight for they are your treasures in life. Wishing you all a HAPPY and BLESSED FATHER’ S DAY! 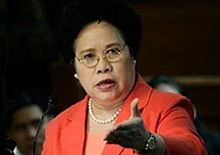