The ‘American Dream’ is still alive

As millions of Filipinos join the celebration of their adopted country’s 239th year of Declaration of Independence, many will share the spirit of national thanksgiving in the welcoming arms of a country that had made a difference in their lives in many aspects.

Lured by the promise of a better life the and the prospect of achieving  the American dream, we join six other ethnicities in the chase for a better tomorrow.

The American dream still lures people from all over the world to the U.S. shores and with those gifted with the grit and daring and the ability to work hard, achieving the dream is still a reality.

Although realities like record debt, persistent joblessness, and millions of underwater mortgages had dampened and slowed down its realization many have only become more determined in their quest and their experiences had only made them better pursuers of the dream..

Just what is American Dream that many people would do anything to achieve in a lifetime?

“American Dream” a Great Depression term used by historian James T. Adams in 1931 to describe the American complex beliefs, religious promises and social expectations. It rang of hope with a capital “H” and traces its beginnings  in the Declaration of Independence and the first European settlers with its basic idea that “every man and every woman shall, regardless of their birth, achieve what they are able to do. Everybody shall be treated and seen equally and be recognized by others for what they are and have reached, referring to their position”. 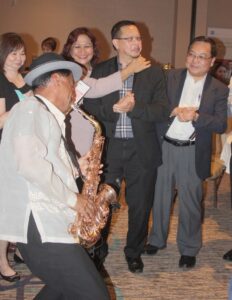 Jazzing Up for 117th Philippine Independence: A Fil-Am sax virtuoso whips it up entertaining guests (Romy and Gloria Rull and Dr. Tony Reyes, at right, ) at the Filipino American Chamber of Commerce in Orange County event to celebrate the Phillippines’ Independence Day.

For a lot of people “The American Dream” is not only about achieving material possession, getting wealthy. It is the ability to achieve, that  goes beyond materialism with the efforts of  fulfilling an objective anchored on faith and equality, liberty in America as the land of opportunities”..

“American Dream” is about immigrants of different nationalities, varying ethnic backgrounds and beliefs “being fused together without abandoning their diverse culture.”

Inscribed on the great “Statue of Liberty” in New York are memorialized phrases quoted from Emma Lazarus’s sonnet “New Colussus”, which she wrote for a fundraiser to finance construction of a pedestal  on which the statue now stands.

“Give me your tired, your poor, your huddled masses yearning to breathe free.” Has become part of American history which described the hope that awaits immigrants to this great country with more than a thousand causes to celebrate”.

With conquering limbs astride from land to land;

Here at our sea-washed, sunset gates shall stand

A mighty woman with a torch, whose flame

Is the imprisoned lightning, and her name

Mother of Exiles. From her beacon-hand

With silent lips. “Give me your tired, your poor,

The wretched refuse of your teeming shore.

Send these, the homeless, tempest-tossed to me,

I lift my lamp beside the golden door!

The welcoming gesture extended to the weary but hopeful immigrants, led to the fruition of great achievements for the greatest country in the world in areas of  innovation, technology, diversity, economy, individual spirit v, tolerance, entrepreneurship, institutions and law, endurance and standard of living.