The Filipino spark that ignited the labor movement 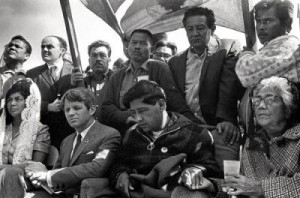 1965 was a big year for Filipino-American Labor history. When we talk about the labor movement, it is often far from people’s minds that Filipinos has been at the forefront of the struggle for social justice in the workplace. In fact, most people do not know about the significant contribution of Filipinos to the history of the labor movement.

We can easily relate the story of Martin Luther King, Jr. We can still hear the echo of his well known 17 minute speech that declared: “And so even though we face the difficulties of today and tomorrow, I still have a dream. It is a dream deeply rooted in the American dream. I have a dream that one day this nation will rise up and live out the true meaning of its creed:â€™ We Hold these truths to be self-evident, that all men are created equal.”

We can also relate to the name and story of Cesar Chavez, the great hero of the Chicano labor movement which gave rise to the creation of the United Farm Workers Union (UFW). Street and parks and schools across the state and across the nation has been named in his honor. While Cesar Chavez became a household name, the Filipino labor leaders have remained unknown even to fellow Filipinos in the United States.

Filipinos in particular, as well as the United States as a nation, are still struggling to grasp and recognize the spark that lighted the farm workers movement that brought about Cesar Chavez into the history books.

It was in the little town of Delano, California, on September 8, 1965 where a group of Filipinos led by Larry Itliong, Philip Vera Cruz, Benjamin Gines and Pete Velasco led the 1,500 Filipino farmworkers off the farms of the area table-grape growers, who worked in inhumane conditions, and demanded wages equal to the federal minimum wage and improved working condition.

As they started their 8 day strike, they had one concern. On the other side of Highway 99, there is a Mexican American union led by a young leader. The Filipinos were scared that their strike would be useless if the Mexican-American workers crossed their picket line and start working the grape fields.

Larry Itliong and the other leaders went to the young, buoyant, and good looking leader of the Chicano union to ask for their support. The young leader said that he can support them but first he had to go to his members and ask for a ‘vote’ to support the Filipinosâ€™ strike. The young chicano leader was Cesar Chavez.

The growers hired non-union grape workers. The Filipinos as well as the Chicanos were intimated, thrown out of their living quarters, violently harassed by hired thugs and the sheriffâ€™s department. Yet the Filipino leaders persevered.

The intensity of the struggle escalated. Cesar Chavez embarked on a 300 mile pilgrimage from Delano, California to the stateâ€™s capital of Sacramento where he pressured the government to listen to the demands of the Filipino-dominated Agricultural Workers Organizing Committee (AWOC) and his own group, the NFWA.

Cesar turned to escalate into a different tactic of protest in 1965. His solution was to send 2 workers and student activists to follow a grape shipment from the farms to the Oakland docks where they persuated longshoremen not to load shipment of grapes into waiting ships. This was the boycott phase of the protest. This proved to be very successful.

The initial boycott was followed by picket lines on Bay Area docks. The Longshoremen’s and Warehousemen’s Union, whose members were responsible for loading the grapes, cooperated with the protesters by not loading the non-union picked grapes.

The strike lasted five years. Larry Itliong and the group of Filipino leaders have been dubbed the ‘Delano Manongs’ (Manong is the tagalog word for older brother, not necessary a relative, a term of respect). Currently, a noted filmaker, Marissa Aroy is in the process of directing the documentary entitled â€˜Delano Manongsâ€™ based on the life of Larry Itliong.

It was Jose Rizal, the Philippine National Hero that stated that “Ang hindi marunong lumingon sa pinangalingan ay hindi makakarating sa paroroonan.” (He who does not know how to look back at where he came from will never get to his destination).

Anytime you pick up that bunch of tablegrape today, be reminded of the Delano Manongs. Remember the Filipinosâ€™ finest hour in the labor movement. They were the spark that lighted the darkness during the farmworkers movement. Indeed, it is better to light a fire than to curse the darkness.