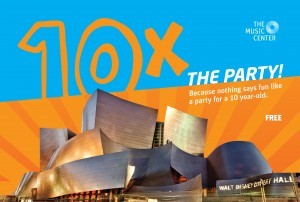 LOS ANGELES (September 17, 2013) – The Music Center today announced “10 Times the Party,” a multi-dimensional public extravaganza on Saturday, October 5, 2013 from 10:30 a.m. – 2:30 p.m. that celebrates the 10th anniversary of The Music Center’s Walt Disney Concert Hall (WDCH). Shutting down Grand Avenue in front of the concert hall in block party fashion, “10 Times the Party” offers the community ten distinctive and highly interactive ways to salute the concert hall’s first decade and its important role as part of Los Angeles’ premier performing arts center. Guests at “10 Times the Party” will be treated to two signature Music Center programs, A Taste of Dance and World City, which also salute Latino Heritage Month; the opportunity to be a part of Los Angeles’ first public Mp3 Experiment, “Mp3 Los Angeles,” a participatory public event created by The Music Center in collaboration with Improv Everywhere; and other special surprises.

The ten ways to celebrate include:

1. DANCING at A Taste of Dance: Tex, Mex & Tex-Mex, free 20-minute dance lessons to learn up to eight different styles, such as Tejano Cumbia, Danza de los Viejitos, Pasito Duranguese, and many more throughout the day on dance floors set up right on Grand Avenue. No experience necessary.

3. GETTING CREATIVE at a Sketching WDCH Workshop on Grand Avenue.

4. GETTING CREATIVE at a WDCH Rose Fountain Ceramics Workshop on Grand Avenue.

5. GETTING CREATIVE at a WDCH Pop-up Cards Workshop on Grand Avenue.

6. GETTING CREATIVE at a WDCH-Inspired Party Hats Workshop on Grand Avenue.

7. SHARING UNEXPECTED MOMENTS AND HILARITY as the crowd joins in an interactive event called “Mp3 Los Angeles,” all together and in sync on Grand Avenue; interested participants should download the LA Mp3

Experiment in advance at http://improveverywhere.com/mp3losangeles/

9. LISTENING AND DANCING to the tunes of a DJ on Grand Avenue.

10. EATING at a variety of Los Angeles popular food trucks.

“During the past decade, Walt Disney Concert Hall has become a vital part of Los Angeles County, as home to the LA Phil, and an inspiration to many,” said Stephen D. Rountree, president and CEO, The Music Center. “‘10 Times the Party’ party honors the many ways the concert hall has contributed artistically and aesthetically to the community as a whole.”

“10 Times the Party” will be the site for the Mp3 Experiment, “Mp3 Los Angeles,” in which the public participates together in a synchronized series of unexpected activities. Anyone can join in by downloading an original mp3 file online and adding it to a mobile device or mp3 player. Participants then synchronize their watches to an atomic clock on the Improv Everywhere website, head out to Walt Disney Concert Hall and blend in with others. At a predetermined time, participants press “play.” Hilarity ensues as participants carry out ridiculous, coordinated instructions delivered to their headphones via narrator “Steve,” while onlookers try to determine what is happening.

About The Music Center

Based in New York, Improv Everywhere causes scenes of chaos and joy in public places and has executed more than 100 missions involving thousands of undercover agents, including the legendary Grand Central Freeze and the infamous No Pants Subway Ride. The group’s videos have received more than 300 million views online.

A Taste of Dance – on Grand Avenue

DANCING at A Taste of Dance: Tex, Mex & Tex-Mex