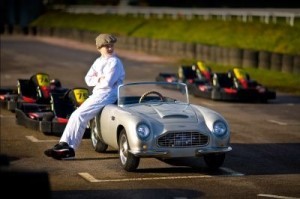 Called the DB Junior, the car is only missing is an ejector seat and retracting front-mounted machine guns. Built for children aged 10 and upwards, a base model will cost £16,500 (about $27,000) before any bespoke features.

Nicholas Mee & Co, an Aston Martin Heritage Dealer, says that the car has been developed to be big enough for a ‘big kid’ to drive and that many bespoking requests so far have been for interior trim and exterior finishes that match a customer’s existing modern or classic Aston.

Nevertheless, the standard car is a ‘real’ car, in as much as it is powered not by pedals, but by a 110cc, four-stroke petrol engine with key-operated electric start and a three-speed automatic gearbox.

And it will stop as well as it runs thanks to Brembo disc brakes. What’s more, the lights and indicators are all fully functioning and the car will hit a top speed of 46mph (75km/h). However, the top speed can also be limited downward upon request.

Nicholas Mee & Co specializes in sourcing rare, unusual and classic Aston Martins for its clients, many of whom are serious collectors.

“We regularly have enquiries from our clients looking for something unusual and different to add to their collection of classics. You’d be surprised how well the DB Junior is engineered, and how much room there is in the cockpit. It’s big enough for an adult and the pedals can be adjusted so that the DB Junior will fit a wide range of drivers. Let’s say ‘junior drivers of all ages’,” explains Managing Director Nicholas Mee.

US expelled 397,000 undocumented migrants in year

Murder raps filed vs. Bantag, others over Percy Lapid killing .