The Olympic golds we never had 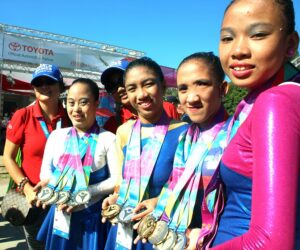 Philippine gymnasts Tanya, Althea, Jovelyn and Sheila were hugging and shedding tears of joy with their coaches and I was clicking away, capturing the moments with my camera. The emotions passed on from the lens and travelled deep inside me and I suddenly found myself genuinely celebrating with them – even if I just met them at that very moment.

I guess the emotions were there because they were fellow Filipinos, or perhaps because I am a parent and I could have felt the pride and joy of the mothers and fathers of these kids.

Weird, but a scene from Two and a Half Men popped out of my head shortly after waving goodbye to them. Remember? When Charlie came to Jake’s soccer game and asked his brother about the game’s score? And Alan said they were not keeping score, which of course, horrified Charlie and minced no words in declaring how ridiculous an idea it was.

I can’t remember the actual line. But Charlie must have blurted: Are you out of your freaking minds?

Humor, of course, cannot be expected to be philosophically perfect. My take on it: You play the game for whatever little cause it was worth to you.

For Tanya, Althea, Jovelyn and Shiela, that moment was overwhelming. I guess the same experience would have been overwhelming even to kids who don’t require special care. The weight of those medals hanging on their necks certainly gave them different feelings – feelings of accomplishment, pride, confidence and of being accepted.

These girls certainly have a sense of what they have achieved and those tears of joy said it all.

I honestly don’t know whether it is a good or bad thing to imagine these kids having enough sense to realize that there was a real Olympic where one gold medal could make an athlete become P1 million richer. Tanya alone has 4 golds.

Philippines has not won a gold medal in the Olympics. The last closest shot we had to a gold medal was in 1996 Summer Olympics with Mansueto “Onyok” Velasco fighting in Men’s 48 kg boxing category. But if was any consolation, the country holds the record for having most medals without a gold.

If these kids were coming from the Olympics, with 10 gold medals hanging on their necks (as of this writing), the country would be in a very big party. There will be a big parade. There will streamers, confettis and marching bands to fetch them from the airport.

How wonderful would it have been to have our athletes come home to pure celebration, without the routine finger-pointing and fault-finding.

But let’s face it, it is not going be that way and we know why. And we don’t even question why it would be so. It is what it is.

But we should be happy because these happy moments are certain to make small ripples here and there back home. And that would be good because there will be more understanding, more love, more attention and hopefully, a little more money – from the government and from the private sector – to make the lives of these girls better.

Yes, that team that we all wish we have.