‘The One: Mayweather Vs. Canelo’ Sept. 14 at MGM in Las Vegas 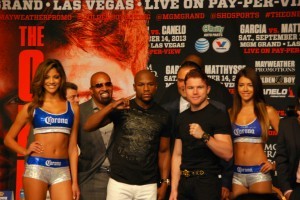 Canelo said, “I don’t care about his record.  I’m not coming to make a good fight, I’m coming to win.  When you fight Floyd you have to be ready for every aspect of a fight.  You have to be able to adjust mentally as well as physically.  I have to be very, very smart and ready to change my plan at any time.”
Also at stake are the WBA Super World Light Middleweight and WBC Light Middleweight or Super Welterweight World Championship titles.

How colossal “THE ONE” is?  Gate tickets amounting to $20 million were sold out within hours that they went on sale in June, three months before the fight.  6 MGM Resort properties, ARIA, MGM Grand, Mandalay Bay, The Mirage, Monte Carlo and New York-New York  will host live closed circuit telecasts of “THE ONE” for $100 each patron, not including handling fees that will accommodate 26,000 boxing fans not including those in bars and restaurants all over the country.  Also, 547 select movie theaters across the country will be showing “THE ONE” akin to watching the fight up close in front row seats for $20-$25 charge to each patron.  Lastly, Pay Per View are expected to be in millions in sales all over  America and the rest of the world.

Richard Schaefer said, “In Australia, the pay per view has already broken all-time records with three days before fight night.  This fight has been off the charts. This fight is something special. Celebrities are calling us to purchase tickets.  We hope to set the all-time pay-per-view record come Saturday night.”

Wednesday’s media press conference held at Ka Theater inside MGM Grand Hotel and Casino lacked the excitement, the noise and the intimidation usually present in previous big fights which is the last push of promoting any fight be it in boxing or in mixed martial arts.  .

There was no trash talk either.  Canelo said, “I think it’s because his other opponents want to talk trash.  I respect everyone except when we get in the ring.”  Everyone on the stage was all business and civil from the trainers to the fighters in contrast to the explosion and the excitement expected on fight night.

Everyone from Richard Shaefer, the CEO of Golden Promotions and Leonard Ellerbe, the CEO of Mayweather Promotions, to the trainers and the fighters all expressed their appreciation to the sponsors and partners that made this boxing mega event a success and one that will stick to memory in a long time.  Corona is the lead sponsor while Fathom takes care of the movie theater business.

The highlight of the press conference was when Mauricio Sulaiman, WBC Director, in behalf of his father, Jose Sulaiman, WBC President, presented to the media and to each fighter the championship belt made of pure gold and Italian leather.  It was designed by a Mexican artisan and bears Mexico Tourism logo which will mark the winner as a Mexican ambassador throughout the whole world.

The third man on the ring is Kenny Bayless and the fight’s judges are Dave Moretti, C.J. Ross and Craig Metcalfe