The poor in the U.S. gives ‘till it hurts’ 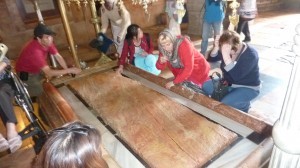 GOLGOTHA, JERUSALEM: Pilgrims from the U.S. to the “place of skull in Golgotha, Jerusalem where Jesus’ body was given the rightful pre-burial customary treatment marvel at the slab where the ceremony took place. Christians worldwide will celebrate His birth on December 25 amid the tumultuous state of the world that He offered Himself to save.

Super Typhoon Yolanda (aka Haiyan) visited Southern Philippines in November when excitement was building up in anticipation of the Christmas season. Known for their religiosity, the Philippines owns distinction of celebrating the longest season of merry making and commemoration of the birth of Jesus Christ.

The November 8 short visit of the strongest howler in history to the impoverished coastline community villages brought untold miseries and destruction that will cost billions to recover from and years to heal the emotional scars brought by thousands of deaths.

As quick as the visit was, the world responded with astonishing promptness to alleviate the suffering of millions who were simply unprepared for such a destructive visitor whose wrath deprived them of hope for the future. Emergency response plans were immediately deployed even if the  host county appeared in utter bewilderment on  the magnitude of the devastation not seen before.

Typhoon Haiyan brought the world to scramble to help the Philippines as the devastation became apparent. Countries and organizations lined up to offer help. The United Nations agencies in the Philippines, with the help of its humanitarian partners and other responders came to “assess the situation and responded rapidly with vital supplies.”

The European Commission contributed millions of dollars in relief efforts, the U.S. Pacific Command deployed resources, Russia’s Emergency Emergencies Ministry offered to provide rescue personnel and a mobile hospital and list goes on and on with continuing effort to raise funds with realizing that the effort is in for a long haul.

More than a month after the typhoon struck, reconstruction efforts have made tiny dents in effort to bring back normalcy.

As we hear and learn of how people opened up their hearts to empathize in action with the victims in their own little and personal sacrificial ways, we are confronted with the issue of the heart that pertains on  how “charitable people really are.”

In the U.S., a new study shows that the “mystical talking point of richest individuals being the most generous, and worthy of tax breaks, is false.” Rich people give much less to charity that poor people.”

Those in the lower income bracket “donated twice as much of their discretionary income as compared to more wealthy individuals.”

Philanthropy.com which tabulated data by following the donation patterns of every state concluded that “people who make between $50,000 and $75,000 a year donated 7.6%   of their income to charity while those earning $100,000 donated only4.2% of their income.”

The accumulated data that followed the donation patterns of every state revealed also that if the local population has 40% of people  making $200,000 a year, donations dives to a measly 2.8%.

The poor gives “till it hurts.”

More than 92% of Americans participate at some level of charitable giving with low income families on the average giving away 4.5% of their earnings as compared with only 2.5 % among the middle class doing the same. The high-income families contribute 3% of their income.

Among the reasons cited why people give include: they are asked to or a presented a giving opportunity; their innate compassion for those in need; they personally believe in the cause; they are affected by the cause and to give back to the community.

Kentex wants vindication, insists it was an ‘accident’

Should a Doctor See That Muscle Strain?