The Tea of Friendship: A Bridal Shower

“Tea became more than an idealization of the form of drinking; it is a religion of the art of life”, Kakuzo Okakura.  Then, there is one from George Gissie who was quoted to say, “The mere chink of cups and saucers turns the mind to happy repose” 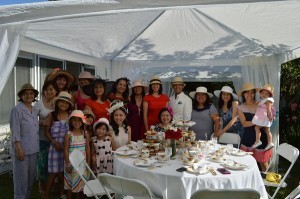 In this vein, I, along with dear friends John Mina, Josie Castro and Benel Liban hosted an afternoon tea for our bride-to-be, Jannelle So. In an attempt to portray the worlds of Jannelle, a Filipina and her fiancé, Lester, a British national; the hosts conceptualized to celebrate her forthcoming marriage by infusing the Filipino guests into the most symbolic of all traditions, the “Britishness” of an afternoon tea. 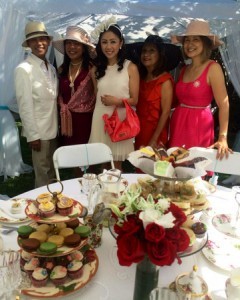 Through the seasons, through the years, it’s your friends who carry you through. What better way to celebrate the warmth and intimacy of beautiful friendship than with the warmest and most intimate of celebrations – a tea. Jannelle’s friends (from left John Mina, Benel Liban, Jannelle, Rocio Nuyda, Josie Castro) gathered on this one glorious afternoon in June to wish her well and send her off to the next journey of her life. A bridal shower it was, but it was more than that…it was an expression of love in this, the most genteel way, over a cup of tea. Photos by Josie Castro & Luchie Allen 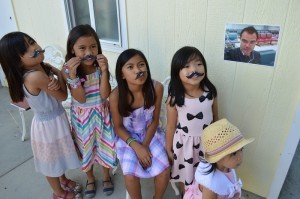 Though physically absent, Lester “attended” the affair with his phot plastered on the wall, for a game- “Pin the mustache on Lester’s face,” which the little girls eagerly played. (L-R: Jannelle’s nieces Sophie, Mikey, Trisha, Simone, Hailey.) 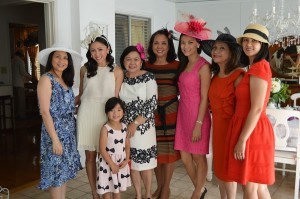 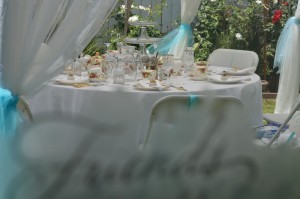 I have long been fascinated by the art of pouring tea. Over the years I have collected the finest of bone china cups, saucers and teapots. I seldom go through the ceremony of tea, but when I do it is for a very special moment.

Josie was the designated tea pourer; and she did so with graceful aplomb. Well, maybe except during an unguarded moment, when Benel asked for more tea. Momentarily forgetting the setting, she yelled back: “What?” Queen Catharine would have cringed, but the guests found this to be amusing and delightful. 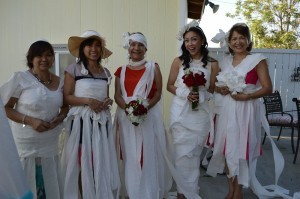 Jannelle’s sister-in-law, Chris Feleo-So, orchestrated the games, the most fun of which was to drape rolls of tissue paper around four female guests acting out as bride. The adult craft makers were outdone in style by the five little girls who draped the bride-to-be in a strapless gown. They were declared the winners. (L-R: Mayette Alcantara, Kay Aquino, Rocio Nuyda, Jannelle, Josie Castro)

Also a winner was Chris (left) who bagged the best hat award; while Sandy Welsh won the most creative hat, with her original hat that was decorated with photos of Jannelle and Lester.

John was the perfect host of making sure that the tea sandwiches, savories, scones, refill of tea leaves were replenished without delay. He filled the jars with clotted cream in profuse abandon, teamed with a container of strawberry jam. Tiny porcelain containers carved with various flower designs on its lid were filled with mint candies as an aperitif and were given out as feminine guest tokens. They complimented the flower designs of the teapots and cups.