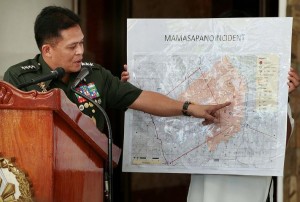 At a media briefing at Camp Aguinaldo on Wednesday, February 4, AFP chief Gen. Gregorio Pio Catapang Jr. shows a map where the January 25 Mamasapano clash that killed over 50 people, most of them PNP-SAF commandos, took place. (MNS photo)

Manila, Philippines |  | Wednesday 3/4/2015 – About 45,000 people have fled their homes in the impoverished southern Philippines as the military hunts Islamic militants, including a top terror suspect wanted by the United States, authorities said Wednesday.

Soldiers have killed dozens of members of the Bangsamoro Islamic Freedom Fighters (BIFF), a rebel group fighting for an independent Muslim homeland in the south, since the operation began last month, the military said.

The offensive, including attacks with artillery and helicopter gunships, has taken place in poor farming areas on Mindanao island, where Muslim rebels have for decades fought for independence.

About 45,000 people living in mostly poor farming communities have fled, fearing an expansion of the violence, said Laisa Alamia, executive secretary of the special Muslim-administered region where the fighting is raging.

She said the displaced had taken refuge with relatives or were huddling in schools, town halls and tents that the government were using as evacuation centers.

“They are cramped. It is raining in the evening and very hot in the day. The farmers have even brought their animals, their cattle with them,” Alamia said.

The offensive is aimed at killing or capturing local extremist leader, Abdel Basit Usman, who is on the US government’s list of most-wanted terrorists with a $1-million bounty.

Usman escaped a police raid in Mindanao on January 25 in which another man on the US government’s list of “most-wanted terrorists”, Malaysian Zulkifli bin Hir, was reported to have been killed.

The BIFF and other rebels killed 44 of the police commandos as the operation backfired, triggering a wave of outrage in the Philippines that has shaken the administration of President Benigno Aquino.

He said, aside from Usman, the military was hunting four Indonesians and one Arab who had bomb-making expertise.

“It is important to get these foreign terrorists because they are the ones teaching bomb making skills,” Padilla told AFP.

The BIFF is a breakaway faction of the Moro Islamic Liberation Front, the nation’s biggest Muslim rebel group.

The BIFF has said it will never compromise on its independence aspirations. It has also has recently vowed support to the Islamic State jihadist group that controls swathes of Iraq and Syria.

Working student’s story helps others get cars from Victory autos