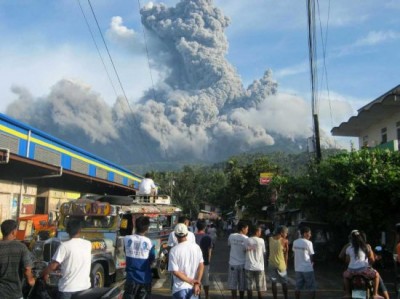 MANILA, February 21, 2011 (AFP) – Thousands of people in the Philippines fled their homes as a volcano erupted on Monday, sending a spectacular column of ash high into the sky, residents said.

The eruption of Bulusan, a 1,559-metre (5,115-foot) volcano, turned mid-morning into night for about 20 minutes across largely farming areas around its slopes, regional army spokesman Major Harold Cabunoc told AFP.

“There was a major ashfall. There was zero visibility,” Cabunoc said.

State volcanologist Ramil Vaquilar told AFP that rumbling sounds accompanied the ash column that rose between two and 2.5 kilometers (1.2-1.6 miles) above the crater.

About 2,000 residents were evacuated from three farming villages in the area as the government banned people from within four kilometres of the crater, said Lieutenant-Colonel Santiago Enginco, the local army commander.

Volcanic ash can cause nose, throat, eye or skin irritation as well as contaminate tap water, while prolonged exposure can cause lung disease, according to the health ministry.

Philippine Institute of Volcanology and Seismology director Renato Solidum said on national television that planes should avoid the skies over Bulusan, as ash might clog jet engines.

However the area is not widely used in the aviation industry.

Bulusan is among 23 active volcanoes in the Philippines, which is located in the so-called Ring of Fire of volcanic activity around the Pacific.

Bulusan, 360 kilometres southeast of Manila, last erupted between March and June of 2006.

The volcano also shot ash into the air in November last year, forcing hundreds of people to evacuate their homes.

However volcanologists said this was not an eruption, rather heated ash deposits near the crater mouth that exploded and burst out on contact with rainwater.

Dogs encourage owners to get up, get out and get moving