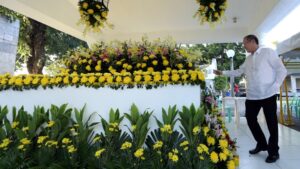 MANILA, Oct 31 (Mabuhay) – Thousands of people have entered the Manila North Cemetery, one of the most crowded cemeteries in Metro Manila, a day before All Saints’ Day.

The Manila Police District said that as of noon, at least 13,000 people have entered the cemetery.

Several policemen, aided by force multipliers including barangay watchmen, have been deployed in and around the cemetery to provide security to people visiting their loved ones.

Authorities expect the crowd inside the cemetery to balloon on November 1.

Children entering the cemetery are given name tags so they will be easier to find just in case they get lost while wheelchairs are being offered for free to handicapped persons who are visiting their loved ones at the cemetery.

Meanwhile, security was tight at the Libingan ng mga Bayani in Taguig City. Vehicles entering and leaving the cemetery were being strictly inspected.

At the Manila South Cemetery, only a few hundred people have visited their loved ones. Authorities are expecting at least 700,000 people to troop to the cemetery on November 1.

Interior and Local Government Secretary Mel Senen Sarmiento personally inspected the security measures being implemented by the police at the cemetery on Saturday morning.

Philippine National Police chief Director General Ricardo Marquez is expected to check security being implemented by police units around in cemeteries around Metro Manila in the afternoon.

Aside from cemeteries, more policemen were also deployed in transport terminals, seaports and airports to provide security to people going to the provinces for the All Saints’ Day weekend. (MNS)

Aquino on ice bucket challenge: I have a cold