THOUSAND OAKS, Calif. (AP) – Tiger Wood delivered a vintage moment, dropping an 8-iron from the sky on the final hole Sunday inside 3 feet for what looked to be a sure victory.

Just not this year. 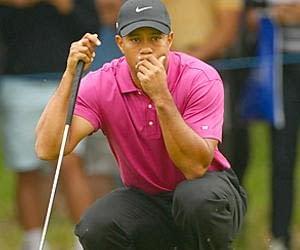 McDowell capped off his greatest season with the biggest comeback ever against Woods. He rallied from a four-shot deficit in the Chevron World Challenge, then upstaged Woods at his own tournament.

McDowell holed a 20-foot birdie putt to force a playoff, then beat Woods on the first extra hole with another birdie from a little bit longer.

Woods might have known what to expect, considering how his year has gone.

Without a trophy for the first time since he can remember, Woods appeared ready to embark on a new chapter after a year of personal turmoil and shocking scores. A four-shot lead turned into a two-shot deficit. He rallied to tie McDowell, then watched the U.S. Open champion deliver the winning shots.

It was the first time Woods has lost a tournament when leading by at least three shots going into the final round.

And it was the first time anyone could recall Woods feeling good after a loss.

Woods lost his big lead with a pair of three-putt bogeys, imploded with a double bogey on the par-5 13th to see his one-shot lead turn into a two-shot deficit, then got new life when McDowell made a couple of mistakes down the stretch.

McDowell won with two birdies on the 18th, but he might have won the tournament with a bogey. With a one-shot lead on the par-3 17th, he pulled his 8-iron into grass so high that he took a penalty drop on the 18th tee and pitched over the trees to 7 feet. Woods missed his birdie putt, and McDowell made his putt to stay even with Woods going to the final hole.

It was only the fourth time in 15 years that Woods has lost in a playoff.

But he had reason to look ahead to next year with growing confidence. After making a mess of his life off the course that ended in divorce, and rebuilding his swing for the fourth time, for the first time all year he looked like a No. 1 player.

In contention for the first time, however, old swing flaws crept into his game under the pressure of trying to win. Woods figured he did well to steady himself for the final few holes, and he did everything right except make a 15-foot putt to extend the playoff.

“The way I’m playing right now, yeah, I would like to continue playing,” Woods said. “Even though I lost and made countless mistakes in the middle part of the round, it said a lot for me to come back and put my swing back together again.”

It was great theater. And for the first time all year, Woods was part of the act.

“He used to appear invincible,” McDowell said. “Of course, he’s made himself appear more human in the last 12 months. But there’s something a bit special about his golf game, and I fully expect that mystique to return as the golf clubs start doing the talking again.”

“We had a good battle out there,” Woods said.

Woods was shaky early on with the putter to quickly lose his four-shot cushion, but he didn’t fall out of the lead until the 13th.

He took his hand off the club on a poor tee shot that went into the left rough, forcing him to lay up. Then came another poor swing, again letting the club fall from his hands, as his wedge sailed over the green. He chipped through the green, chipped back 6 feet long and missed the putt to make double bogey.

McDowell reached the green in two for a birdie, which was a massive three-shot swing. It was the first time Woods trailed in the tournament since the 13th hole of the opening round, a stretch of 54 holes.

Woods probably should have lost the lead earlier.

He holed a tough, downhill putt from 8 feet for par on the sixth to stay one ahead. And on the par-3 eighth, after a flop shop from deep rough sailed 15 feet onto the fringe, Woods again made a key par putt to keep the lead.

Woods was grinding to keep his game together, which was not unusual considering it had been one year and 20 days since he last played in the final round of a tournament with the lead. He never got it back, thanks to the clutch putting from McDowell.

A year ago, McDowell was a last-minute alternate to this tournament when Woods’ personal life began to collapse. He finished second and earned enough world ranking points that he eventually got into the U.S. Open, which he won at Pebble Beach.

At a party Saturday night, McDowell asked tournament director Greg McLaughlin if he could at least try to win the tournament. Woods and a four-shot lead used to be a given. Upon seeing McLaughlin after winning, McDowell joking apologized.

It may have ruined a good story for Woods.

It capped a dream season for McDowell, who won $1.2 million and moved up to No. 7 in the world.