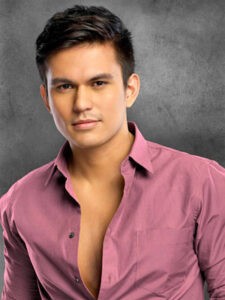 MANILA (Mabuhay) — Years after exiting the “Pinoy Big Brother” house and transferring to GMA-7, Tom Rodriguez continues to wear the matinee-idol crown, this time playing Sergio Santibañez in the newest adaptation of “Marimar.”

In an interview, the actor revealed he didn’t watch the original version or the 2007 adaptation starring Marian Rivera and Dingdong Dantes.

“I might copy kasi the acting of the original cast. Kaya I thought na bigyan nalang ng fresh na attack and different spin,” he shared.

He knows TV audiences are always looking for something new.

“So, I’m thinking na maybe, we could do na parang merging of different ideas. Maybe we can combine some of the old ideas with new ones,” he said.

Isn’t he worried about being compared with actors who have played the role also including Eduardo Capetillo?

“A bit but I will just do my best. Lalo na sa abs,” Tom said, smiling.

The actor thinks he still has a long way to go if he is to match their physique. Tom only started training when he got the call confirming his participation in the show.

He is not that worried, however, because he feels the character of Sergio Santibañez is not vain.

“Hindi siya out to look good. Natural sa kanya ’yung being passionate and brooding,” he said. “Parang it is hidden how compassionate he is. Ang makikita lang muna ng tao eh, ’yung labas niya, hindi nakikita ’yung other side niya.”
The opportunity to work with Miss World 2013 Megan Young makes this project wothwhile for Tom.

“Wala na akong masasabi sa kanya. I mean, everyone would be fortunate and lucky na ma-partner with her,” he said.

Tom and Megan have already worked together in the past.

Aside from Tom and Megan, others in the cast of “Marimar” are Jaclyn Jose, Ricardo Cepeda, Carmi Martin, Jaya, Cris Villanueva, Candy Pangilinan and Lauren Young.

Dingdong all set for altar date with Marian