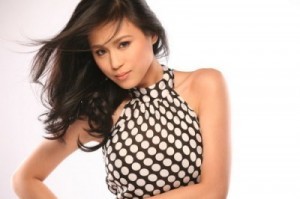 Toni Gonzaga was named Best Actress at the 63rd FAMAS Awards held at the Newport Performing Arts Theater on Sunday night for her performance in the Star Cinema movie “Starting Over Again.”

On Instagram, Gonzaga posted a photo of her trophy with the caption: “To God be the glory.”

Her husband, director Paul Soriano, also took to Instagram to congratulate Gonzaga, saying: “My wife wins best actress! So proud of you, Tin. Hard work pays off. God is good!”

Gonzaga recalled her younger days when she and her sister Alex were still just dreaming of becoming actresses one day.

Allen Dizon was named the Best Actor for his performance in the movie “Magkakabaung.”

Meanwhile, Sarah Geronimo was hailed as the youngest recipient of the Iconic Movie Queen of Philippine Cinema award as she joined the likes of Gloria Romero, Susan Roces, Maricel Soriano, Dawn Zulueta and Nora Aunor.

All six of them were honored during the star-studded ceremony.

Below is the list of winners in this year’s FAMAS Awards:

MalacaÃ±ang urges Pinoys in US to vote for Jessica Sanchez