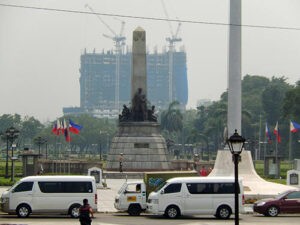 Photo of the Rizal Monument with Torre de Manila (already 19 floors high) rising behind it, taken on August 20, 2014. Photo from the Office of Sen. Pia Cayetano

MANILA (Mabuhay) – THE Supreme Court has issued a restraining order against the construction of the 46-story Torre de Manila.

Petitioner Knights of Rizal said the construction mars the view of the Rizal Monument in Luneta.

In its petition, they said when Torre de Manila reaches the full height of 46 floors by the target date of 2016, it would completely dominate the vista and, consequently, substantially diminish in scale and importance the most cherished monument of the national hero.

Aside from this, the petitioner also asserted that DMCI violated the zoning ordinance of the city of Manila since the building is located in an area reserved for schools and government buildings as mandated under Manila City Ordinance 8119 (Zoning Ordinance of Manila).  (MNS)