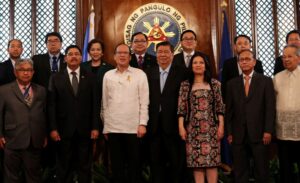 President Benigno S. Aquino III huddles with the ASEAN Law Association (ALA) Officials and Delegates, led by ALA president Indonesian Chief Justice Dr. Hatta Ali, for a snap shot during the courtesy call at the President’s Hall of the Malacañan Palace on Friday (February 27). A non-government organization, ALA brings together all the different branches of the law profession – judges, law teachers, law practitioners and government lawyers. (MNS photo)

In a text message on Thursday, Communications Secretary Herminio Coloma Jr. said the accusations made by lawyer Homobono Adaza and Herman Tiu-Laurel did not have any solid basis.

On Wednesday, Adaza and Tiu-Laurel lodged a treason complaint against Aquino and members of the Philippine government’s peace panel with the Office of the Ombudsman.

They cited Article 114 of the Revised Penal Code, which states that an individual is guilty of treason when he or she “levies war against the Philippines or adheres to her enemies giving them aid or comfort within the Philippines or elsewhere.”

Earlier in the day, Senator Miriam Defensor Santiago also described the treason complaint as baseless “because they [respondents] are being punished for what seems to be a failure of judgment.”

“They made the wrong judgment… That cannot be treason,” she said.

According to her, treason is an overt act which shows a person has no loyalty left for the Philippines.