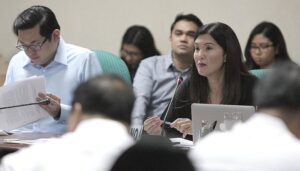 Senator Pia Cayetano, chair of the Senate Committee on Education, Arts and Culture, listens to Department of Education Secretary (DepEd) Armin A. Luistro during a Senate hearing, Tuesday, May 05, 2015 as he presented the K to 12 Basic Education Program Midterm Report from 2010-2014. Cayetano believes the K-to-12 program is still bound “to happen” and will effectively bring about reforms in the country’s education system. (MNS photo)

MANILA (Mabuhay) — Sen. Antonio Trillanes IV has asked the Supreme Court to stop the controversial K to 12 Program, created under Republic Act 10533 or the Enhanced Basic Education Act of 2013 and which added two more years in high school.

Trillanes said before implementing the controversial program, the government should first address the real problem plaguing the education sector like the lack of classrooms and the low salary of teachers.

Insisting that RA 10533 violated the 1987 Constitution, Trillanes and the other petitioners asked the high court to issue a writ of preliminary injunction or a temporary restraining order against the K-12 program.

“The principal reasons cited by the DepEd in justifying the policy shift adopting thh K to 12 Program… clearly are not in accord and run afoul with the constitutional provision which expressly provides that the state should create, maintain and support an education system relevant to the needs of the Filipino people and Philippine society,” read their petition.

The petitioners said no substantial or adequate consultation was made by the DepEd before implementing the K-12 Program, in violation of Section 16, Article XIII of the Constitution.

The petitioners also said the K-12 Program also violates Section 5, Article XIV of the Constitution, which mandates the enhancement of the right of teachers to professional advancement, because 85,000 teachers and non-academic personnel of higher education institutions are at risk of losing their jobs.

Trillanes said before implementing the controversial program, the government should first address the real problem plaguing the education sector like the lack of classrooms and the low salary of teachers.

The petitioners branded as “misleading” the DepEd’s claim that it has already closed the “resource gap” or the shortage in teachers, classroom, books and toilets. They said DepEd’s claim was based on 2010 data.

Trillanes and his fellow petitioners feared that the K-12 program will result in more unemployable high school dropouts, in violation of Section 1, Article XIV of the Constitution, which gives people the right to access quality education.

Two petitions have earlier been filed with the SC in relation to RA 10533.

One of them was filed by a group of universiry professors who alleged that Commission on Higher Education/CHED Memorandum Order (CMO) No. 20, Series of 2013, created pursuant to RA 10533, will cause massive labor displacement – job losses of around 78,000 workers – at the tertiary level.

The CHED memo, which the petitioners described as “anti-Filipino,” abolishes mandatory subjects in the current curriculum in tertiary education, such as Filipino language, Literature, and Philippine Government & Constitution.

The SC later granted the group’s request for a temporary restraining order while awaiting a comment from the government.

The second petition—filed by the “Coalition for the K to 12 Suspension,” composed of four individuals and 16 groups led by the Council of Teachers and Staff of Colleges and Universities of the Philippines— meanwhile claimed that with the K-12 Program, education workers are faced with the risk of early separation, forced retirement, constructive dismissal, diminution of salaries and benefits, labor contractualization, and a general threat to self-organization.

The petitioners said the fact that a new legislation is being proposed via House Bill No. 5493, which seeks to “mitigate the adverse impact of the K to 12 Law,” shows that the RA 10533 is “incomplete.”

According to the House bill, more than 70,000 college faculty and non-teaching personnel stand to lose their jobs because of the lack of first year college and second year college enrollees during the transition period starting 2016.

The petitioners said the controversial law failed to provide “full protection to labor and promotion of full employment and equality of employment opportunities, et al,” in alleged violation of Article XIII, Section 3 of the 1987 Constitution.

The group also said the Implementing Rules and Regulations dated September 2013, the Joint Guidelines dated May 2014, and Department of Education Order Memo No. 2 Series of 2015 dated January 2015, which were all formulated based on the law, are against the law and subject school workers to unjust labor practices.

Under the enhanced basic education program of the Department of Education—called K to 12 or Kindergarten plus Grades 1-12—a student will be required to undergo kindergarten, six years of elementary, four years of junior high school and two years of senior high school.

Trafficked Filipino teachers urged to step out of the shadows