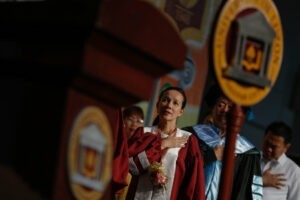 Presidential candidate Sen. Grace Poe is conferred an honorary doctorate in public administration during the commencement ceremonies at the University of Luzon in Dagupan City, Wednesday. The event was a chance for Poe to reconnect to her roots in Pangasinan, where her grandfather, Fernando Poe, Sr. grew up.(MNS photo)

Senator Antonio Trillanes IV said that the decision of the Commission on Election’s (Comelec) Second Division to cancel Poe’s certificate of candidacy might result to the election of a president who is just an “afterthought.”

“She is the most popular candidate right now by topping the polls. Kung pagkadating bago ng eleksyon, tatanggalin mo yan, we will now have a president who is just an afterthought. He would not be the true choice of the people. Magulo ‘yan,” Trillianes said at a media forum.

“They are treading dangerous waters. Akala nila wala itong implications. Once you deprive the people of their chosen candidates, magkakaroon ito ng backlash later on. They wouldn’t be able to govern well,” he said.

Trillanes’ Magdalo group has expressed their support for Poe as its presidential bet.

The vice presidential aspirant said that the Comelec should let the people have a free rein on who they will support as their next president and not anoint one by disqualifying other candidates.

“At most, this is vague. Give the benefit of the doubt to the candidate and let the people decide. That is their mandate as Comelec: to be an overseer of fair and non-partisan elections. Ngayon pa lang, namimili na sila kung sino ang mananalo by disqualifying candidates. Hindi nila puwedeng gawin ‘yan,” he said.

He even advised Poe’s opponents not to believe in winning by default.

“Let’s play it fair. Galingan na lang. Present yourselves to the people. Inspire them to vote for you. If not, deal with it and move on. The winning candidate was able to convey a clearer message.”

“You can’t win by default. That is not how elections are decided,” he said.

Poe, the leading candidate in presidential preference surveys, was disqualified by the Comelec Second Division on Tuesday over issues regarding her residency and citizenship. (MNS)

Alex and Asiang: The Aristocrat family of restaurant’s story