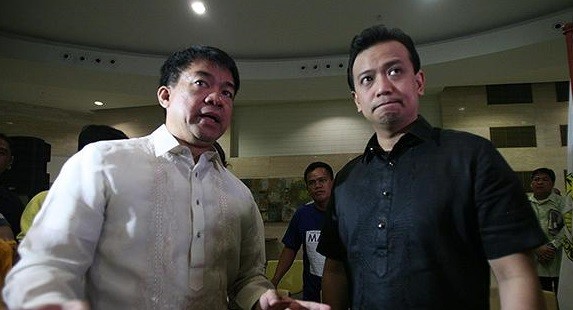 Trillanes said he made the remark after being asked about his ocular inspection of the alleged Hacienda Binay in Rosario, Batangas.

Trillanes warned that the Binay camp is using everything to twist the situation into a “class war” between the rich and the poor instead of an investigation on corruption.

He pointed out that the vice president is wealthier than him.

“Sabi ko, diyan makikita ng kababayan natin ang pagbabalat-kayo ng taong ito. That is the context but it is expected that the Binay camp will try to twist everything up to make it appear that this is a class war. Of course it’s not. Mas mayaman siya sa akin. I am still the poorest senator,” he said.

He also challenged the media to film his house as well as the Binay house so that people will know the difference.

The senator said the vice president’s camp is trying to dig up dirt against him but has failed.

He also said he is at a disadvantage regarding the proposed debate between him and Binay since he is a former soldier while Binay is a lawyer.

“Even on paper, it’s a lopsided match in his favor. He is a 30-year veteran in Philippine politics. He is a human rights lawyer who is presumed to be a master of argumentation and debate. On the other hand, myself being a former soldier, I get used to having either giving orders or receiving orders. We are not wired for that,” he said.

“I believe I am standing on moral high ground and that is all I need in this debate.” (MNS)