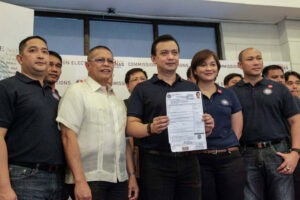 Sen. Antonio Trillanes with members of Magdalo party, shows his certificate of candidacy (CoC) for vice president, at the Palacio del Gobernador in Manila, Tuesday. Trillanes will be running as an independent candidate, but expressed support for Sen. Grace Poe’s presidential bid in the 2016 elections. (MNS photo)

Trillanes was accompanied by his wife Arlene and fellow Magdalo group members, including retired Philippine Marines colonel Ariel Querubin, at the Commission on Elections’ main office in Intramuros, Manila.

Trillanes also announced that he and the Magdalo group are supporting the presidential run of Sen. Grace Poe.

Trillanes had earlier announced his support for Poe’s bid for the presidency in 2016.

Poe had introduced Sen. Francis “Chiz” Escudero as her running mate. Both aspirants have not filed their COCs.

Trillanes is the second Nacionalista Party (NP) member to file his COC for vice president, after Sen. Ferdinand “Bongbong” Marcos.

Sen. Alan Peter Cayetano, another NP member who has announced an intention to run for vice president, has yet to file his COC.

In his COC, Trillanes said he is running as an independent candidate. He told reporters, however, that he is still a member of the NP.

“Talagang ganyan, hindi naman natin mapipigilan ang kandidato if they are offering themselves to the country, so we will let the people decide,” he said, referring to the vice presidential candidacies of his fellow NP members. (MNS)