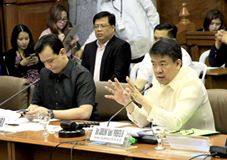 MANILA (Mabuhay) — Senator Antonio Trillanes IV said Wednesday that the Magdalo Group will support the presidential bid of Senator Grace Poe if ever she decides to run for the post in 2016.

The group originated from a set of military officers, including the senator and his classmates in Philippine Military Academy Class ’95, who took over the Oakwood Hotel in 2003 to air their grievances against corruption in government.

He said the Magdalo Group has already talked with Poe.

Poe has yet to issue a statement regarding Trillanes’ announcement.

Trillanes said the primary criteria they took into consideration in picking the candidate was the welfare of the country.

He expressed confidence that the Magdalo Group’s 500,000 card-bearing members would be solidly behind their candidate.

“We’ve done that before and we will do it again,” Trillanes said.

Poe, who has been leading presidential and vice presidential surveys, has yet to decide if she is running for a higher post in the 2016 elections.

She is being wooed by Liberal Party presumptive presidential candidate Interior Secretary Mar Roxas to be his running mate.

Poe has also met twice with members of the Nationalist People’s Coalition. A third meeting has been set next week. (MNS)