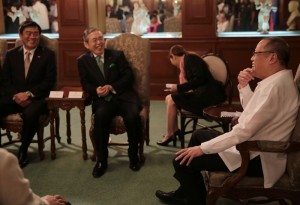 He also supported the petition filed by the Coalition for K to 12 Suspension before the Supreme Court.

Trillanes claimed he had visited several schools and found that teachers have been unprepared for the K to 12 program’s supposedly rushed curriculum.

The senator has always been against the implementation of the K to 12 program, even saying that the government should address first the lack of classrooms and textbooks.

Under Republic Act 10533 or the Enhanced Basic Education Act of 2013, a student will be required to undergo kindergarten, six years of elementary, four years of junior high school and two years of senior high school. It will be rolled out in school year 2016-2017.

On the other hand, data earlier provided by the Department of Education showed there is a shortage of 34,000 classrooms for incoming students during the first year of the K-12 program implementation.

The Commission on Higher Education (CHED), meanwhile, estimates that a total of 86,001 faculty members in private higher education institutions are at risk of being displaced when students start senior high school under the K to 12 program. (MNS)