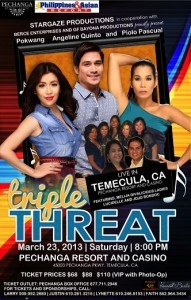 The Triple Threat concert series featuring Piolo Pascual, Angeline Quinto and Pokwang will have the first leg of their 2013 U.S. tour in Temecula, California on March 23, 2013.  It will be held at the world famous Pechanga Theater at the Pechanga Resort & Casino.

“Triple Threat” is a popular term used in Filipino show business to refer to a celebrity who is talented in three industries, specifically movie, TV, and music.  That being said, the show’s headliners are considered as three of the best Triple Threats in the Philippines.

Manila-born Piolo Jose Nonato Pascual or Piolo is currently one of the biggest stars of Philippine cinema, TV and music/entertainment. He has received multiple acting awards and nominations from the Philippines’ award-giving bodies such as Philippine Movie Press Club (PMPC), FAMAS, Star Awards, Golden Screen Awards, and Gawad Urian.  He was recognized as “Mr. RP Movies,” which is based on box-office sales, by the Guillermo Mendoza Scholarship Foundation for the years 2003-2005.  Of Filipino-German-American ethnicity, he is also one of the most sought-after models.

Piolo is a main stay in “ASAP XV,” a noontime variety show on ABS-CBN, the mother company of The Filipino Channel (TFC).  He was first introduced on TV in the youth-oriented TV show “That’s Entertainment” back in 1994.  His first movie was with Kris Aquino in “Vizconde Massacre: God Help Us!” in 1993.

He has been performing in concerts since 2001 and has traveled the world bringing the Filipino music to fans everywhere.  For more information on Piolo, visit www.piolojosepascual.com.

Angeline Quinto broke into the Philippine music scene in 2002 as a finalist in” Star for a Night,” a prestigious singing competition that launched the careers of Sarah Geronimo and Mark Bautista.  She has since then appeared and won multiple talent contests and signed an exclusive recording contract from Star Records.  Her first album has recently received platinum certification from PARI and she successfully staged her first solo concert in 2011.  She has sung several theme songs for movies and “teleseryes” and opened for Sharon Cuneta’s U.S. concert tour.  She is currently a mainstay in ABS-CBN’s “ASAP Rocks.”  For more information on Angeline, visit www.angelinequinto.com.

Marietta Subong or Pokwang is a multitalented Filipina comedienne, impersonator, actress, singer and TV host.  Now at the height of her career, she received the Best Comedy Actress award from PMPC and Best Female Comedian from People’s Choice Awards in the Philippines.  As one of ABS-CBN’s “Star Magic” group of entertainers, she was regularly featured in TV shows, concerts and a number of films.  She was born into the limelight when she appeared as a contestant in the “Yes Yes Show” 2004.

Triple Threat is presented by Berce Enterprises, whose upcoming line-up includes the Star Magic 20 Tour in Hawaii, which will also feature Piolo Pascual, Angelina Quinto, Pokwang and other ABS-CBN stars; the Teleserye Bida tour in Los Angeles, Union City, Chicago and Anchorage; and the 4 Da Best US Tour, which also features Pokwang.  Also appearing in the Triple Threat show at the Pechanga Theater are Lucidelle, Jojo Bondoc and the Melija Divalicious Ladies.  The show begins at 8:00 P.M.

Experience it all at Pechanga Resort & Casino

As the largest casino in the Western U.S., Pechanga offers an all-inclusive AAA Four-Diamond luxury resort in the heart of Southern California’s Wine Country of the Temecula Valley. With more than 3,800 slots, 130+ table games, and a smoke free poker room, the resort boasts the soaring elevation changes of the Journey at Pechanga course, ranked as the 4th “Best New Course You Can Play” by GOLF Magazine in 2009. The 445-acre resort also includes a full-service spa, featuring a couple’s massage suite; nine award-winning restaurants and a 24-hour food court; superstar concerts in its theater, a comedy club; world title boxing events; and three clubs and lounges, including Silk, the largest nightclub in Southern California. “Experience it all” at Pechanga Resort & Casino.

Take a ride on one of our many comfortable and convenient buses that frequent Pechanga Resort & Casino every day.

The overlooked side of Nanette Inventor

Aiko moves on from messy breakup