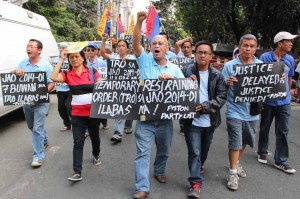 — PISTON members, representing drivers and operators of public utility vehicles, march to the Supreme Court on Tuesday, urging justices to issue a Temporary Restraining Order (TRO) on the implementation of Joint Administrative Order no. 2014-01. The order imposes higher penalties for traffic violations, which the group finds unreasonable. (MNS photo)

TUCP spokesperson Alan Tanjusay said the current minimum wage can no longer sustain needs of a family, arguing that the real value of the peso has been eroded by 35 percent due to several factors including consumer price index, tuition fees, the recent Metro Rail Transit/Light Rail Transit fare hike, and the impending water and electricity rate increases.

“The real value of the current P466 minimum wage is P299 only. It cannot sustain the needs of a family. As a result, many employed workers fall through the cracks and join the growing ranks of the working poor. Thus, we are asking the board to give a ‘living’ minimum wage. We particularly appeal to employers to grant our petition,” Tanjusay said.

“We have been experiencing growth in our economy but the workers who worked hard for it are wallowing in poverty. They have jobs and most are employed yet they do not benefit the development. This is highly unfair and grossly unjust to workers and their families. It is a social discrepancy that needs urgent attention from government and employers must take seriously into consideration,” he said.

TUCP made the appeal at the panel’s review of the current wage rate held Wednesday in Pasay City.

The board is composed of three government representatives, one each from the Department of Labor and Employment (DOLE), Department of Trade and Industry (DTI) and National Economic Development Authority (NEDA) and two each from the labor and employers’ sectors.

The review process will take about a maximum of two months before deciding on the lawful amount.  (MNS)