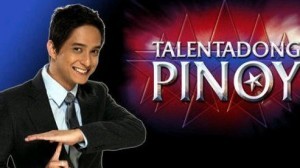 Mult-awarded reality talent show “Talentadong Pinoy” was the hands down winner for Original Reality Competition Program award, beating ABS-CBN’s “I Dare You”, GMA’s “Protégé: The Battle For The Big Artista Break” and “Inside Protégé”, as well as its own offshoot show, “Talentadong Pinoy Kids”.

Although “TalentadongPinoy” host Ryan Agoncillo lost the Outstanding Original Reality Competition Program Host award to Dingdong Dantes, who won it for “Protégé”, the former still snagged the Outstanding Male Host in a Musical or Variety Program for his work in GMA’s “Eat Bulaga”.

Screen legend Eddie Garcia was also honored with the Ulirang Alagadng Sining award. The veteran actor, a mainstay of TV5’s “Third Eye”, also won accolades for his performance in “Bwakaw”, the Philippine entry to the Oscars that came the closest to clinching a nomination slot for the Best Foreign Language category this year.

The other special awardees this year were Gloria Romero, Nova Villa and Mel Tiangco who all received the Helen Vela Lifetime Achievement Award for drama, comedy and broadcasting respectively.

Now on its 9th year, The Golden Screen Awards (GSA) is given annually by the Entertainment Press Society (ENPRESS), Inc. to deserving films, actors and technical people.